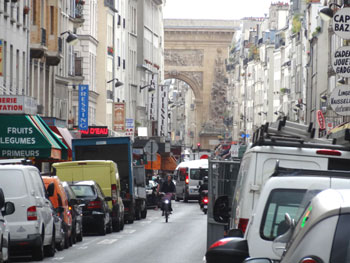 If you want to discover the life of a neighbourhood in Paris, take a walk in the shopping streets: here is the real heart of the city, and it is here that its actual identity is unveiled. Focus on the rue du Faubourg Saint-Denis, heart of the 10th arrondissement :

Major axis between two popular neighbourhoods, Strasbourg Saint-Denis and Gare du Nord, the Faubourg Saint-Denis Street is a real mirror of today’s Paris : multicultural, traditional and “bobo”. Coming from the south, from the subway station Strasbourg Saint-Denis, you will first see the porte Saint-Denis, an impressive triumphal arch built in 1672 to mark the boundary between Paris and its “suburbs”. The city has grown since then, but the street kept its “extramural” character, something like a popular border area to the bourgeois centre of Paris, but that welcomes its inhabitants in search of exoticism and simplicity.

Mostly Turkish during the 80s, you will indeed meet a lot of Indians, Pakistani (for instance in the well known Passage Brady, wrongly called Little India, as it is mainly occupied by… Pakistani!), Africans and Chinese, and even some Kurdish or Syrian restaurants! And in the middle of this cosmopolitan mix (which is the beauty of this neighbourhood), you will also find some typical French institutions. The restaurant “Julien”, for instance, with its Art Nouveau building listed as a historical monument at n°16, or again fine food store Julhès. A cohabitation that should be a lesson to some, but that offers the visitors above all a huge gastronomic universe which is hard to find elsewhere in Paris…

The Faubourg Saint-Denis Street is indeed a place to have a good meal, but no one forgets to have a drink either. Since a few years, this place has become the official “rue de la soif”, i.e. bar street, of the 10th arrondissement. A relaxed and pretty trendy atmosphere, initiated by the bar “Chez Jeannette”, which was the first one to bring the “bobo” youth to this street. Since then, all the cafés of Faubourg Saint-Denis followed the move, but staying, you must admit, quite authentic. You will therefore find simple but friendly bars (like the Sully, the Mauri7 or the Château-d’Eau) where you will have the opportunity to – finally! – enjoy a draft beer for less than 3 euros.

Of course this sudden success makes everybody jealous, and the Faubourg Saint-Denis Street is slowly changing. Cosy Bars and restaurants are opening, and here and there caterers and specialized fine food stores appear. Whether you like these changes or not, the Faubourg Saint-Denis Street sticks to its tradition: to always move with the times while keeping its own personality. Let’s just hope it will last a long time!

A street that you cannot miss, by day and by night!

3 days in Paris, what to do and what to see
Alleys and passageways of the Faubourg Saint-Antoine
The terraces of a Paris café