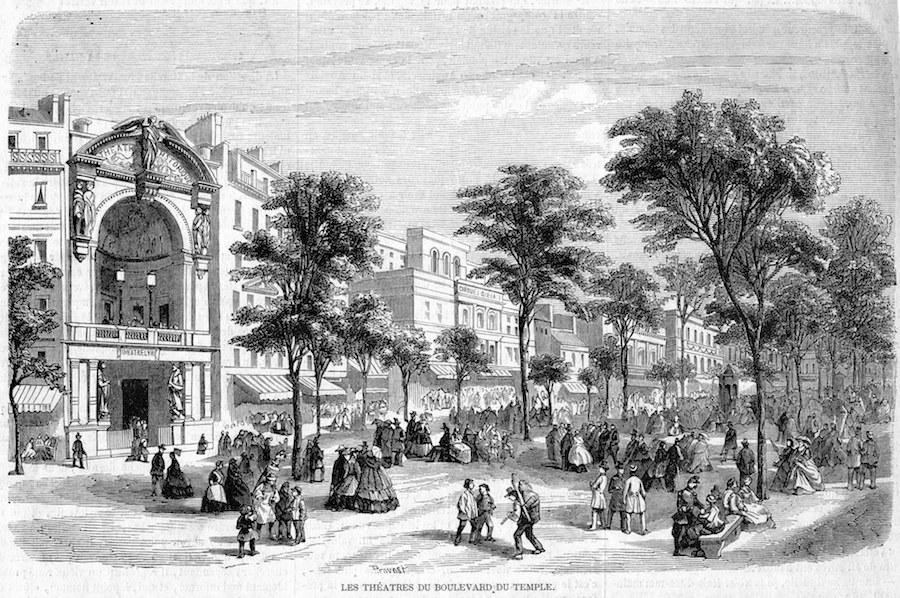 What on earth could be the Crime Boulevard, name of one of Paris’ streets during the 19th century? A dark alley, spot for all criminals and scamps? A boulevard infamous for its rapines? None of the above… Granted, the king Louis-Philippe was attacked in front of the n°50 of that same boulevard, which caused the death of 18 people, but sparing the king and his sons.

No, it’s much more joyful: Crime Boulevard is the name that was given to the Boulevard du Temple from the 1830s on a road which is situated between the 3rd and the 11th arrondissement of Paris. At that time, dozens of theatres were situated along that artery, where entertainers, mimes, marionettes, acrobats and all kinds of buffoons used to make their show and whom 10 000 to 20 000 people came to see every night! And the inspiration for the name Crime Boulevard comes exactly from these shows given all along crazy theatre nights.

To make an illustration for the new name, a journalist and theater critic counted for the “Almanach des Spectacles” the number of murders that took place every day on Crime Boulevard. Poisonings, immolations, drowning, kidnappings… more than 151 000 crimes, performed by the greatest actors of that time, will enthusiast the Parisian smart set during over 20 years.

Sadly, the Baron Haussmann decided in 1862 to destroy all the theatres of the street during the big works for the reorganisation of Paris. All but one: the Theâtre Dejazet, which still exists, and which was the only one on the western side of the street, since only the buildings on the eastern side were destroyed. To get a glimpse of the atmosphere back then, you can go to the cirque d’Hiver (110 rue Amelot) or to the Théâtre de la Porte Saint-Martin (18 boulevard Saint-Martin), respectively built in 1852 and 1873.

But if you really want to understand the incomparable atmosphere of the Crime Boulevard, you should definitely see Marcel Carné’s chef d’oeuvre, “Children of Paradise”, movie which reproduces perfectly and realistically the poetry of this unique street in Paris’ history… You can also admire at the Carnavalet museum a painting called “Vue générale des théâtres du boulevard du Temple, avant le percement du boulevard du Prince-Eugène, en 1862 », showing a nice view over the boulevard and its numerous theatres…

To visit the present-day popular district to Paris, head to République and walk towards Belleville.