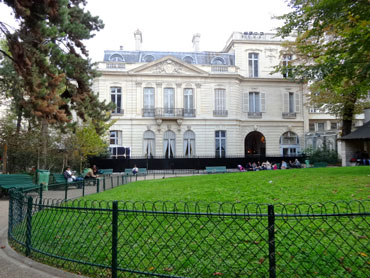 The 9th district of Paris is not the best district if you are looking for pleasant public gardens. Best known for its wonderful architecture from the 19th century rather for its greenery, it is more an arrondissement of Paris to stroll aimlessly around. Nevertheless, there is a garden that is really worth seeing : Alex Biscarre garden, at the level of the nice place Saint-Georges.

This small garden, circular-shaped, is both a family place (appreciated for its playing area…) and a haven of peace where you can have a rest in the shade of the trees. But the main interest of square Alex Biscarre is the wonderful scene of buildings that surround it, and particularly the Town House (called L’Hôtel Dosne-Thiers) situated at the very left when you enter the garden. Anyway, square Alex Biscarre is the former private garden of this town house, that is nowadays a library owned by the Institut of France (public institution that groups all the academies of sciences, arts and letters together).

Besides being one of the greatest building of the district, l’Hôtel Dosne-Thiers was the residence of Adolphe Thiers, 1st president of the 3rd French Republic (1871 – 1873). Destroyed during the Commune de Paris civil war, it has been reconstructed between 1873 and 1875, and sold to the Institut of France in 1905 who yielded the garden to Paris.