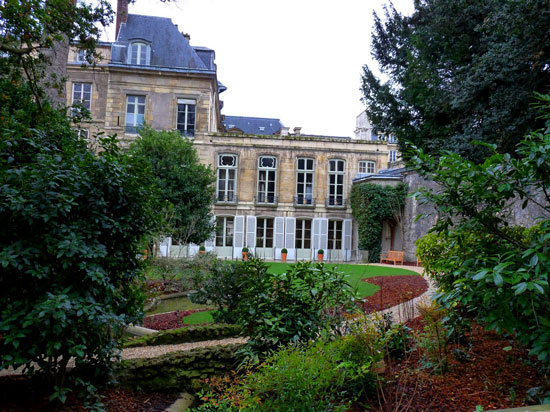 Inside the Hotel de Soubise, probably the most beautiful Mansion in the Marais, was opened to public in 2011 the Archives Nationales public garden, a wonderful green area made up of 4 gardens formerly owned by of different mansions: the hotels of Rohan, d’Assy, Breteuil, Fontenoy and Jaucourt.

In the heart of Marais, those unknown addresses will offer you a delightful romantic setting and will take you back to the 18th century, when the neighborhood was the center of Paris intellectual and social life, and the 19th, heyday of  « Second Empire » architectural style (which masterpiece is the Opera Garnier)

To get there, cross the impressive courtyard of the Hôtel de Soubise and take the entrance on your right. You will enter the gardens via a small alley (ruelle de la Roche), one of the oldest streets of Paris once passageway between the current rue des Archives and rue Vieille-du-Temple.

On the right, the hotel d’Assy and Breteuil gardens are characteristics of urban gardens that prevailed in the 19th century. Decorated with a river and beautiful trees (including an only Indian horse chestnut in Paris), you will feel the unrivaled romantic atmosphere of the place. Atmosphere that continues until Fontenoy garden, close by.

Further, gardens of Jaucourt, actually an orchard, and Rohan, the largest one, are more classics, but still offer nice secrets green spaces that we do not expect to find in the heart of Marais !

An exceptional place not to miss during a walk in the Marais.