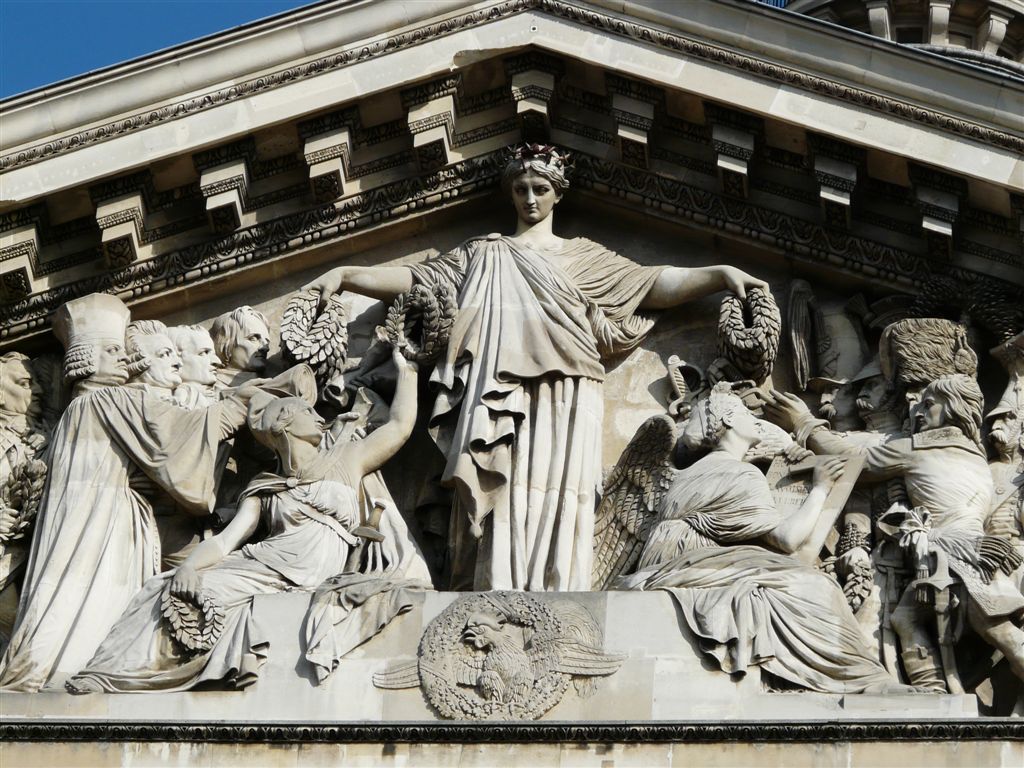 Overlooking the Latin Quarter, the Pantheon is one of the most emblematic monuments in Paris. Ordered in the 18th century by King Louis XV, who had promised to build a magnificent church in honor of St. Genevieve if he healed from a terrible disease, what we know less about this monument is that its pediment had been for centuries a major political issue, and the one we can see today is the result of a long, and fantastic, adventure.

Once cured, Louis XV kept his promise and in 1754 he ordered the construction of a church to replace the old abbey at the top of the Montagne Sainte-Genevieve. But the church, completed in 1790, is assigned in 1791 by the National Assembly to the cult of the Great Men of the French Nation. The Revolution, that broke out two years earlier, wants indeed to make the Pantheon the republican and secular twin of Saint-Denis, royal necropolis. 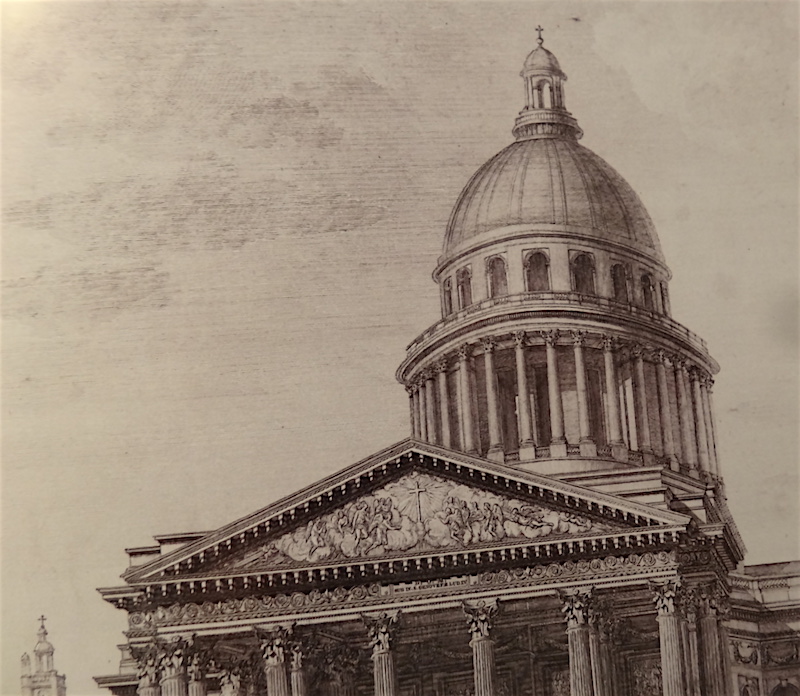 The first pediment was made in 1774 by the sculptor Nicolas Coustou. A relief called The Adoration of the Cross, where cherubs and angels surround a flaming cross.

On 1 August 1791, the Assembly ordered a new engraving instead of the Latin inscription. “Aux Grands Hommes la Patrie Reconnaissante”, is born. Then, it had been decided to replace the relief by a work that pay tribute to revolutionary ideals . 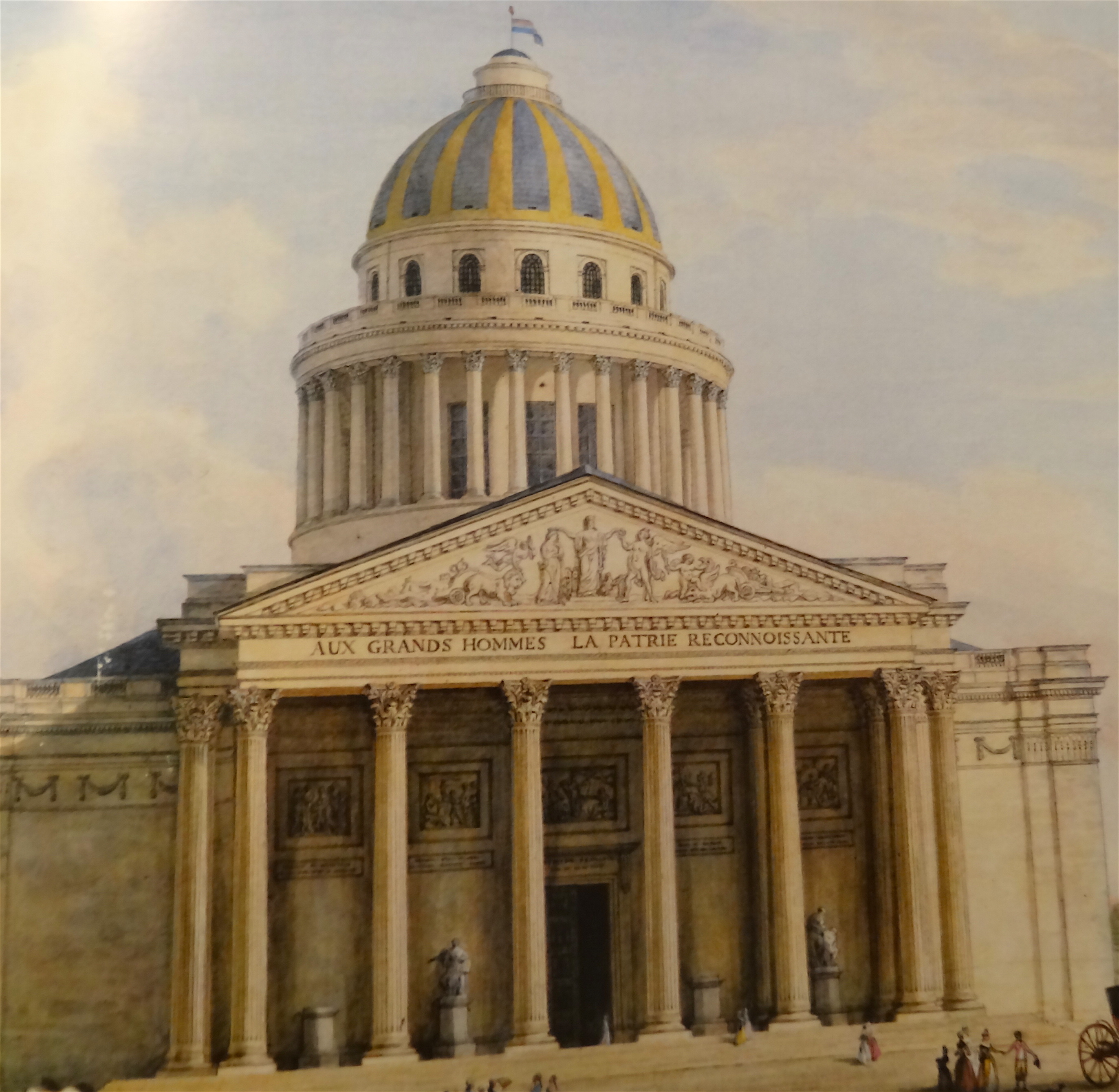 But after the Revolution come the Napoleonic Empire, which decides to make part of the building for worship in 1806. The pediment, considered too revolutionary, will be covered with a veil for nearly 10 years…

In 1815, Louis XVIII marks the return of the monarchy, which wishes to reiterate the importance of the Catholic Church by giving back the entire Pantheon for worship. It is even renamed Saint Genevieve Church.

But since this is obviously not enough, it was decided to remove the pediment (veiled since 1806) and replace the old writing. “Aux Grands Hommes la Patrie Reconnaissante” is replaced by « D.O.M. sub invocat. S. Genovefae. Lud. XV dicavit. Lud. XVIII restituait ».

It will be proposed firstly to “Christianize” the previous pediment. But then, the architect Baltard realize a completely new work representing a large glowing cross. 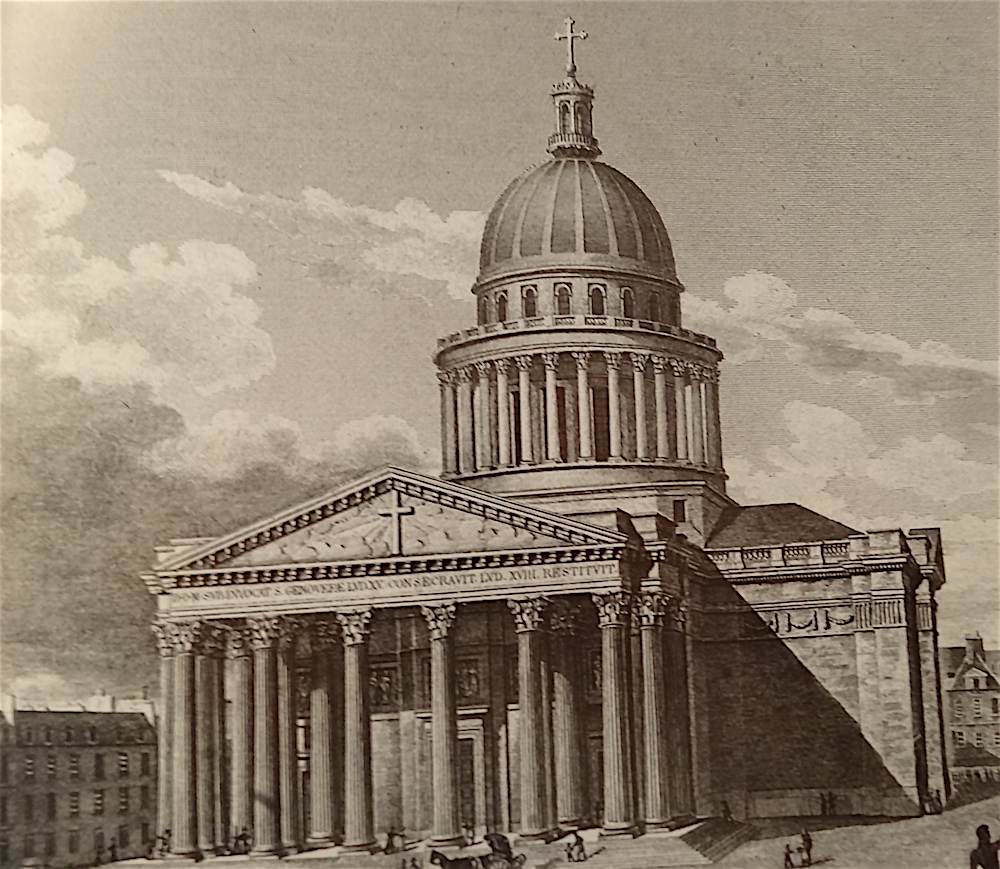 In 1830, the new Louis Philippe d’Orleans regime wants to show its link with the Revolution. One of his first acts? Rebrand “Sainte-Geneviève” in “Pantheon”, and carve again on the front of the monument “Aux Grands hommes la Patrie Reconnaissante”. Problem, the old flaming cross has nothing to do with the new use of the building. So, a new pediment is ordered again ! 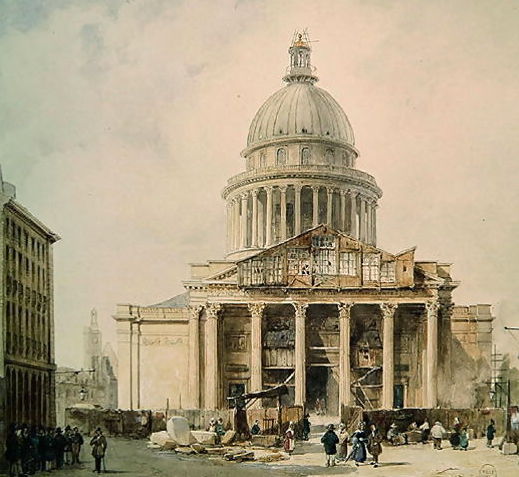 The sculptor David D’angers will make this new pediment. After 7 long years hidden from the public, the facade will be inaugurated on August 31, 1837, succeeding those of Coustou, Moitte and Baltard. This is the fourth and last fronton we can admire today !

Allegory of the Revolution,we can see on the pediment men who have contributed to the progress of the Nation. In the center, the Motherland distributes crowns, surrounded by Liberty and History. At his feet, the Republican rooster and the Imperial eagle gathered in a single crown.

To the right of the Motherland, the civil order is represented: 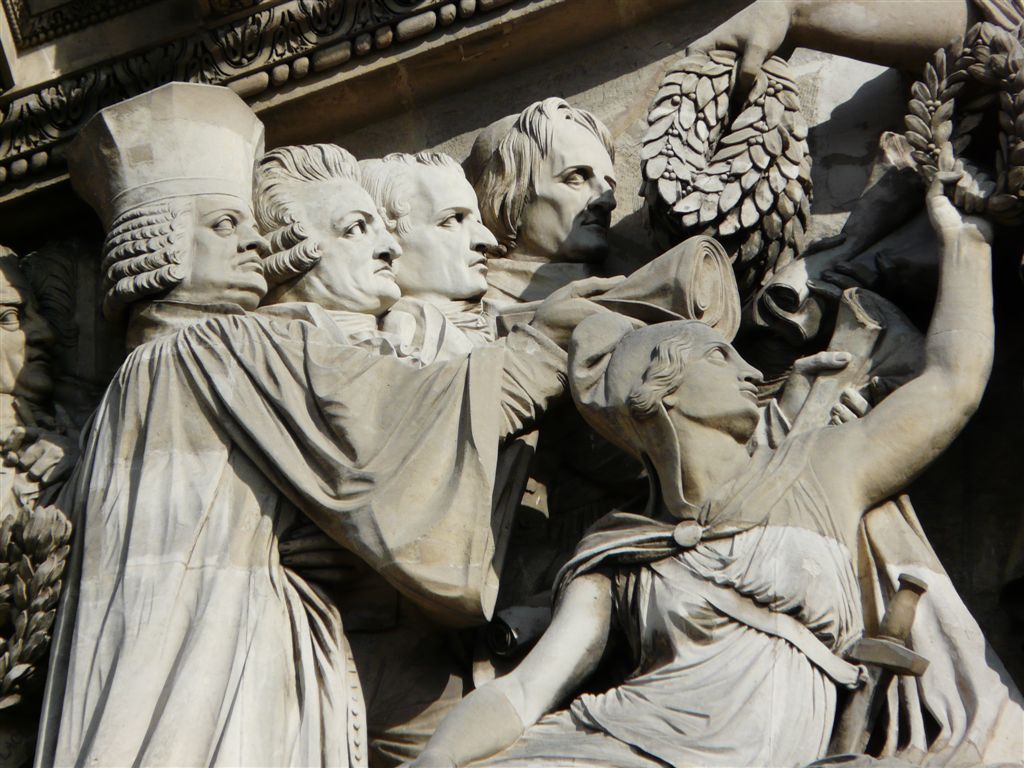 From left to right : Malesherbes, Mirabeau, Monge, Fenelon. Further are sitting side by side Voltaire and Rousseau : 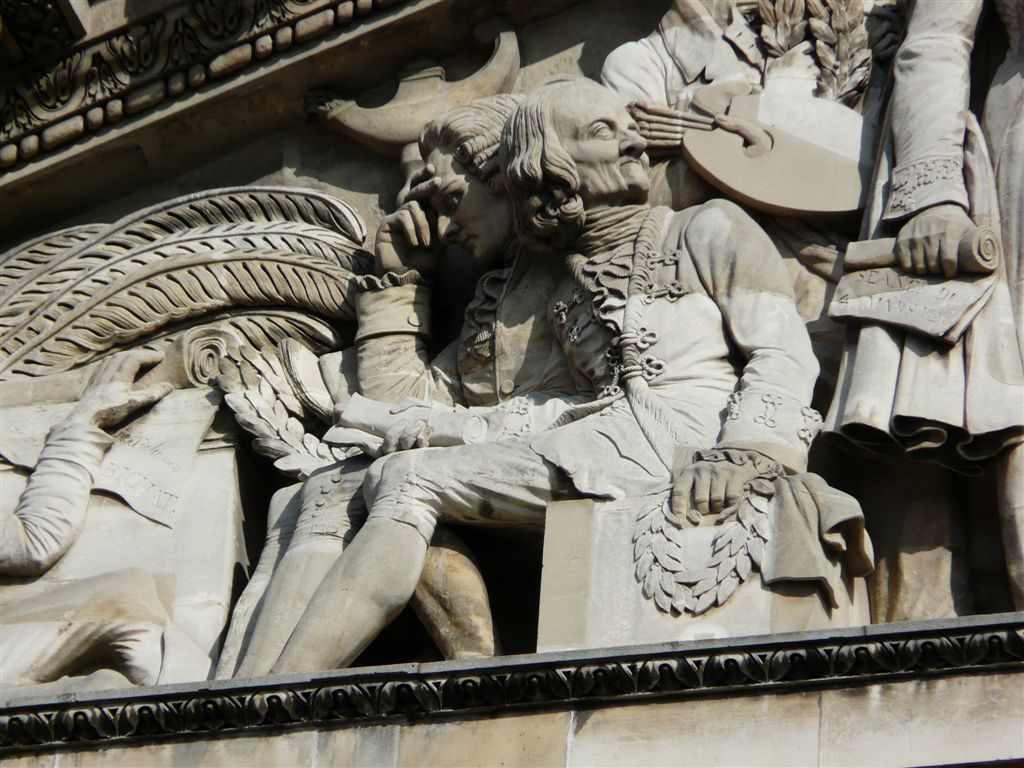 To the left of the Motherland, the military order. Dressed in the  Republican uniform, General Bonaparte : 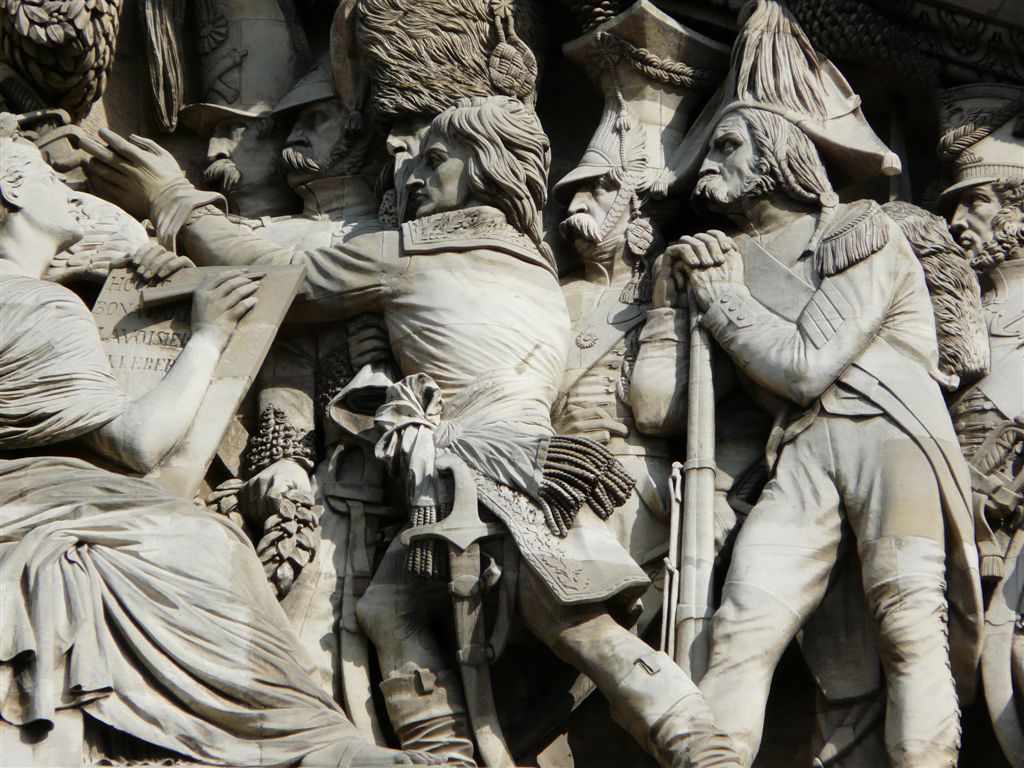 If the facade did not change since 1837, the monument stil remains the mirror of a national reflection. Lately in 2015, the entry in the Pantheon of four heroes of the Resistance was, more than a national tribute, an eminently political decision…

Book your e-ticket for Panthéon
FacebookTwitterLinkedInWhatsApp