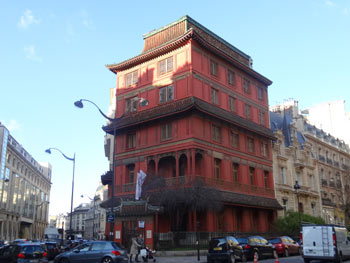 In the heart of the Plaine Monceau, a Paris neighborhood which has undoubtedly the largest mansions in m², is an amazing and unusual building : a Chinese pagoda.

A pagoda? There are yet many mosques in Paris, temples, and other buildings for all faiths …

Yes, but the original side of the building is that it is not at all a religious building, but simply the result of the love of a man for his country of origin – China – and his willingness to share it with his adopted country – France.

Arrived in 1902 in Paris, ChingTsaiLoo is an art dealer who has known a dazzling success. He bought a mansion built in 1880, classic style, in order to work a few steps from Parc Monceau. Mr. Loo was lucky, the owners were not asked to have a building permit at this time. It was a boon for those who wanted to add a little whimsy to their daily life…

The architect Fernand Bloch is then responsible for transforming this 19th century building into a beautiful pagoda of Chinese inspiration. The mansion is raised by two floors, the roof was rebuilt, and the entire building painted in red.

The construction was achieved in 1926, which obviously has led many complaints and even a neighbourhood petition for demolition. In vain… the “House Loo” is still standing up today. And although it was sold in 2011, its activity keeps going according to the wishes of its founder, namely to be a cultural bridge between France and China.

It is now a private museum, which offers throughout the year exhibitions and shows (and even offers spaces privatized). The only opportunity to discover the magnificent interior decor typically Chinese of this pagoda.