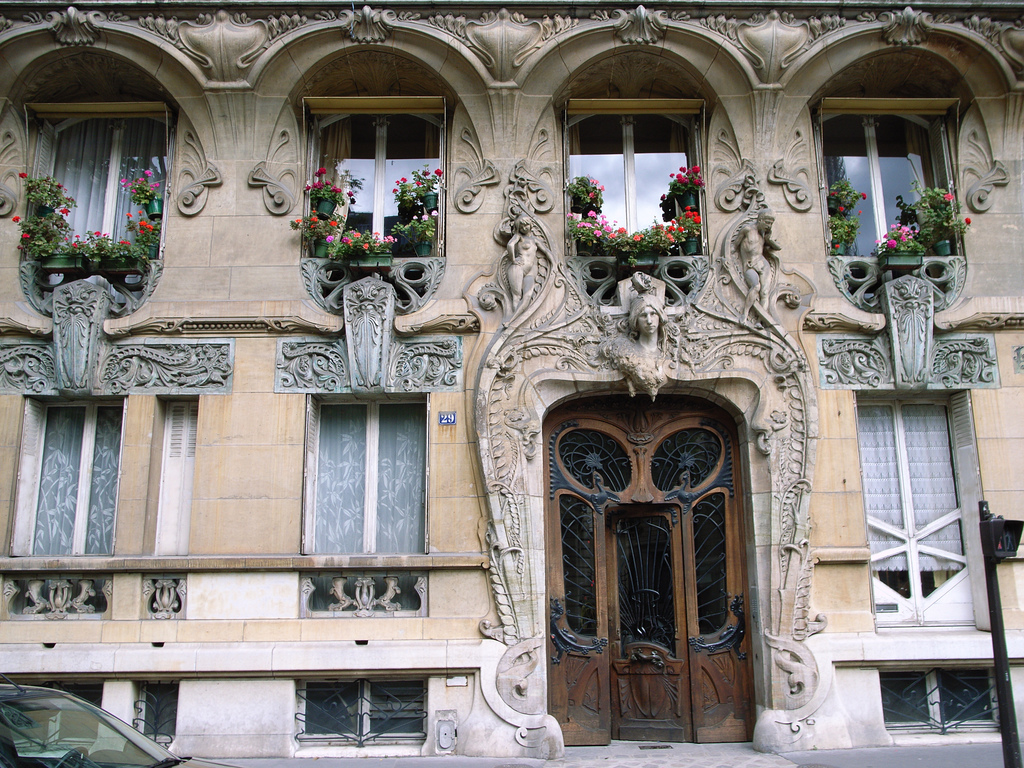 Although it has been a very short architectural trend (about 1890 till 1905), the Art Nouveau has produced some exceptional buildings for their imagination and creativity; two of the most beautiful ones are in Paris. First the Castel Bérenger, in the 16th arrondissement, known to be the founding construction of the Art Nouveau movement, then also the 29 avenue Rapp, also called Lavirotte Building, in the 7th arrondissement.

You absolutely need to see latter one, work of Jules Lavirotte between 1900 and 1901, during a stay in Paris. Whether you are an architecture lover or not, the building won’t leave you cold, for its luxuriance being an ode to Parisian romanticism, proudly rising face to face with the Eiffel Tower. To confirm that, just observe the passers-by’s reactions in front of that building: their expression won’t deceive you. The 29 avenue Rapp is a singular, and exuberant, work of art. Winner of the façade award of Paris in 1901, the building is indeed a real catalogue of all kinds of patterns: flowers, animals, motives, persons,… everything that you would have  imagined on a façade is there. Please also note the irregular and asymmetrical architecture of the façade or again the excessive ornamentation of the front door.  The Art Nouveau has brought a new lease of life and fantasy to classical architecture, advocating for an anti-academic style favourable for the most surprising works. And the Lavirotte Building is one of the most brilliant witnesses of it.

This creative liberty is perfectly illustrated on the front door of the building. An unusual and… quite suggestive piece. Having a good look at it, you will soon notice that its central pattern represents a phallic form. Symbol of virility that you will also find in the disposition of the corridor and the courtyard, if however you have the chance to find a nice resident who agrees to let you in. You can find other sexual allusions in the numerous carved details on the façade, allegories which of course provoke all kinds of analysis… but we won’t draw any final conclusion on this topic! Because that is the real beauty of the Art Nouveau: it is a style brimming with imagination which lets the creativity run wild and therefore also the interpretation.