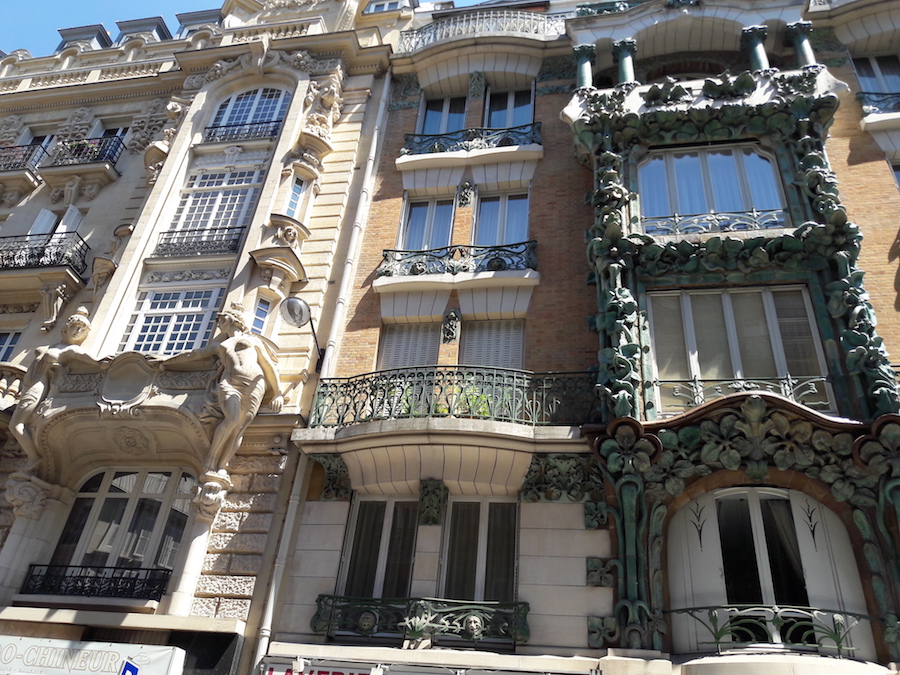 By virtue of its exuberance and fancy, Art Nouveau is an artistic movement as surprising as ephemeral (1890 – 1910). Twenty years during which genius architects burst with creativity to make all kinds of buildings and mansions. In Paris, advent of Art Nouveau appeared after 30 years of strict laws regulating the construction of parisians private buildings ( called “Haussmannian” style).

An uniformity that stifled artists imagination, thrilled again from 1882 specifications relaxing. Art Nouveau is extremely present in Paris, mainly in the 16th arrondissement where are no less than 400 buildings from this movement.

You will also find some spread out the city, to discover during your walks in Paris . Below some of the most emblematic buildings in Paris .

Considered as the founder of Art Nouveau buildings , Castel Beranger revolutionized architecture by using and mixing new materials as wrought iron, metal, burstone , and the use of original designs as the seahorses perched on the facade. The facade of the building won in 1898 the first prize of the facades of the city of Paris.

See also :
>> Buildings made by Hector Guimard in Paris

Built by Henri Sauvage (and Ch. Sarazin) in 1912 , a pivotal period for the architect who slowly left at this time Art Nouveau, 26 rue Vavin is the first Parisian  « terrace building », community house that offers to every dwelling sunshine and ventilation.

The facade is covered with sandstone tiles of the same type as those of the Paris metro .

Reaumur street has been in the early 20th century a laboratory of new Parisian urbanism after the post-Haussmann regulations of 1882, 1884 and 1902 . Among the amazing buildings bordering the street is at No. 124 an iconic façade of industrial buildings during Art Nouveau.

The most original elements are a the steel sructure, the bay windows on the 4th floor and the use of brick on the 5th floor

This six-floors building is above all exceptional for its facade, richly decorated with lush vegetation and creepers on the central part of the 3 first floors, bat and fantastic characters around the 4th floor loggia .

Made by the architects Albert and Edouart Autant (father and son ) in 1901, the ceramic is from Alexandre Bigot, ceramist and decorator of many art nouveau buildings in Paris. 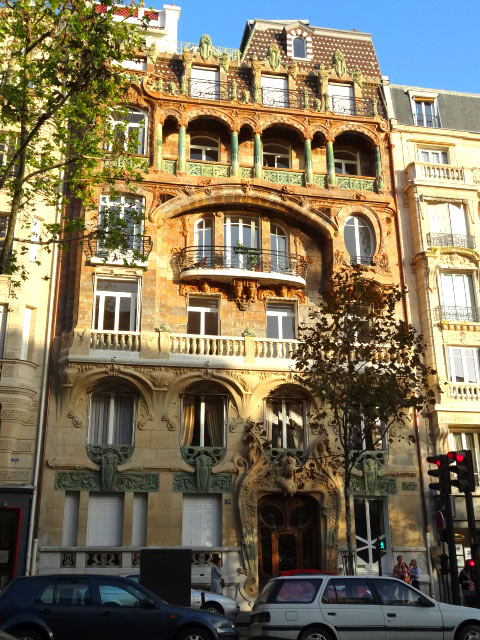 29 Avenue Rapp, also known as Lavirotte building, is probably the most eccentric and whimsical art nouveau building in Paris. Irregular and asymmetrical architecture, fancy decoration (flowers, animals, patterns), it is a real catalog of forms and shapes it was possible to imagine at that time.

Do not miss the front door, suggestive representation of male genitals… Winner of the prize of the facades of the city of Paris in 1901.

In the 18th district, in front of the old railway line, is an original building designed by the architect Henri Deneux for its own use . He lived on the top floor of the building and rent out the other apartments.

The architecture uses bricks as the church of Saint-Jean-de-Montmartre, and the facade is covered with squares of colored sandstone over the concrete structure. Only its straight lines break with the Art Nouveau aesthetics usually made of curves.

Selection of most emblematic buildings Art Nouveau in Paris. To be discovered during your walks in the city.
Continue reading