Paris is often referred to as an « open-air museum » or a “living museum”. And this is just, the right word naming these special features of the city that promote Paris one of the most beautiful cities of the world, thanks, of course, to its architectural and cultural outstanding heritage. During your visit, in addition to buildings, parks or museums you will see master work of art created by great French and International artists all through the city. A statue around the corner of a Boulevard embellished by richly ornamented public buildings, so while strolling around Paris discover this free contemplation the city offers you.

Historically, the Second Empire (1852-1869) and the Third Republic (1872- 1940) periods, had largely contributed building this open-air museum image of Paris, with numerous commissions to artists that lead to a large amount of artistic masterpieces scattered all around the city. The uprising of a wealthy upper middle class, during the same time contributed in spreading this public art. An official art that, obviously, had established an academic and classical style to the detriment of avant-garde works of art, but yet, generated Great artists such as Carpeaux, Landowski, Dalou, Bourdelle, Rodin, and so many others….

Zadkine is the last artist that had one of his masterpieces erected in Paris as public art. On july 2012, (on Allée Georges Besse – 1, Boulevard Edgar Quinet, 14th district), was raised “La naissance des formes ” an abstract sculpture from this major sculptor of the 20th century who put his stamp on the artistic life of Montparnasse area. And, it is actually, in this area that you will find the Zadkine Museum, located in what was the house and studio of the artist. 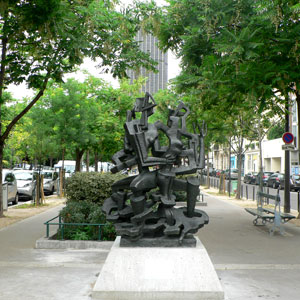 One of the most impressive work of art, one could see in Paris, is beyond doubt La Fontaine de l’Observatoire, also called “des quatre parties du monde”, and could be counted as urban monument. On the higher part of it, represents the four parts of the world (the 4 continents…Oceania seemingly, was deliberately, left aside, for a matter of balance and harmony …), it was created by Jean-Baptiste Carpeaux and Pierre Legrain, while the Dolphins were sculpted by Emmanuel Frémier.

(To get more acquainted with the art of Jean-Baptiste Carpeaux – a major official artist, who created, among other works, parts of the façade of l’Opéra Garnier – visit the Musée d’Orsay) 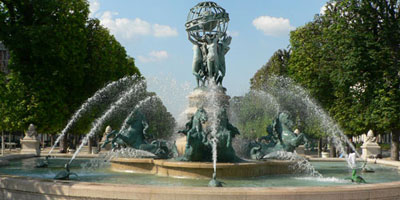 More simple, but yet surprisingly impressive : in a small, and rather common public garden of the 15th district (square Blomet), and between the playground and few garden seats, stands a Juan Miro sculpture. Actually, the public garden fills the place of a building where Juan Miro used to live, and for old good days’ sake the artist offered his “ Oiseau Lunaire” …. 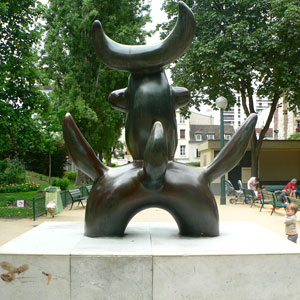 If you go to the Avenue Montaigne, the most chic and fashionable Parisian avenue, stop in front of Le Théâtre des Champs–Elysées and give it a look. This austere, made of reinforced concrete building, was decorated by Antoine Bourdelle, one of the most famous French sculptors of the 20th century. On about fourteen meters length, it shows the Méditation of Apollon and his Muses, on the pediment, and numerous bas-reliefs and friezes of mythological inspiration. You can admire more sculptures for public buildings by this artist if you visit the Palais de Tokyo.

Paul Landowski is also one of these great official artists with who has a strong presence in Paris and even in France. And it is on the Pont de la Tournelle, 5th district, that you can see one of Landowski’s major masterpieces. It is not the most well-known, neither the most aesthetically pleasing one, but it represents Sainte Genviève, protective and patron saint of Paris City. Actually, the small child carefully and gracefully protected by Geneviève, is no other than Paris … 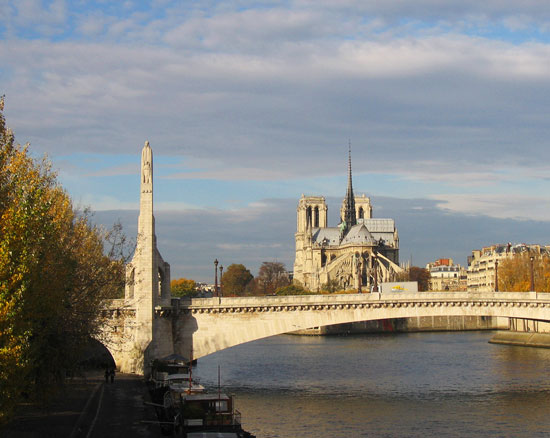 Sculptures, statues and frescos made by French and International greatest artists.
Continue reading

Stories and anecdotes from the Musée d'Orsay
The Victory of Samothrace
Paris most beautiful buildings
Lavirotte building
The Castel Béranger : Birth of Art Nouveau
Montparnasse Cemetery