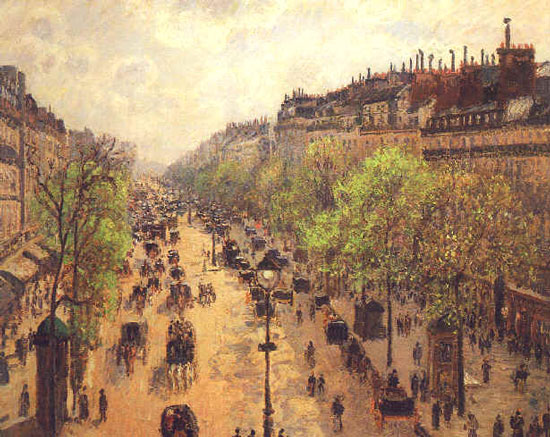 Since the Gallo-Roman period up to the huge work lead by Baron Haussmann in 1860, which gave the city its present look, Paris was always surrounded by fortified walls, expanded due to the development of the population all the while defining the delimits of the town’s geography. Still ? Not really….

Between 1670 and 1785, no other fortification surrounds Paris.

THE “KING OF SUN” PROJECT

We are under the reign of Louis XIV (1638-1715) and the King of Sun, following the great military victories, considering that the capital does not need any more defense. Proud, the king wants to prove to the whole world that Paris remains inpregnable even without its protection !

In the place of the wall built by the father Louis XIII, the king and his minister Colbert have the idea in mind of transforming the premises into beautiful promenade which will stretch over upto 4 kilometrs, between La Madeleine and Bastille.

In a more assymetrical construction today ( refurbished by Haussmann), the Boulevards nevertheless will root in their base as they are still present today : a huge space dedicated to both pedestrians as well as cards, and a place full of leisure and entertainment.

A SYMBOL OF THE 19TH CENTURY

As for the term «  boulevard » Louis XIV didn’t go far to fetch it….Big war amateur ( 33 years of battle for 54 years of reign!), this term originates from the Flemish Bolwerc, which in the military language means «  an exterior fortification of a fortress composed of median inn of the walls ».

Until de mid 18th century, the boulevards constituted a previliged place for walks on the right bank, delimiting Paris and the country side. This is the reason why the roads nowadays of Paris have changed name from the boulevard to « rue » into « rue du Faubourg » ( see Faubourg saint-antoine).

Gradually the nobility and finance will be constructing magnificent individual hotels in the west side while implanting popular entertainment spots like theaters( from which the term » theatre de boulevard »!), cafés and cabarets. One of the most beautiful example of this Golden age of the East Parisian Boulevard is the Boulevard de Temple, reknowned to be a boulevard of crime.

The 19th century is indeed the height of the Great Boulevards, a place of celebration and pleasure in Paris. The first walks succeed the wide avenues. The bourgeois come here slumming, the women to rebate, visitors to parade around during universal exhibitions.

It is around these boulevards that the covered passages will be created, offering a pleasant shelter from dust and dirt around.

A place typically known to be “right bank”, which still retains its reason to be in the past.