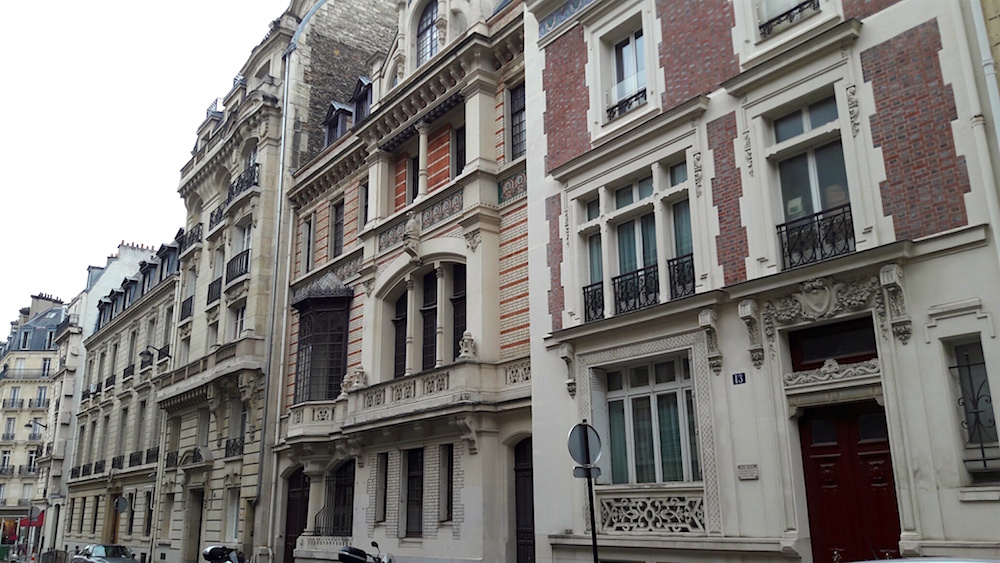 The Plaine Monceau, chic and bourgeois zone of the 17th arrondissement bought in the 19th century by the brothers Pereire (bankers and industrialists) to make it a residential place for wealthy Parisians, is filled with magnificent mansions, from Places des Ternes to the Parc Monceau.

A street of this district deserves however a particular attention so much it is, over 200 meters, the archetype of the taste and the architectural style in 19th century: rue Fortuny.

An extraordinary concentration of magnificent Mansions to be appreciated without moderation!

Notice for example the building at the n°8 of the street which Renaissance style façade is decorated with elegant statues. One of the most curious Hotel Particulier of the rue Fortuny with the one situated n°9, the eclectic style of which makes reference to the medieval, Renaissance and 18th century periods while using contemporaries ornamental techniques (ceramic, terra-cotta, bricks). A marvel classified as Historic Monument!

A so beautiful street obviously attracted many celebrities since its creation in 1876. At n°13 lived in Marcel Pagnol (writer), the famous actress Sarah Bernhardt, in love with the 17th arrondissement since she also lived boulevard Pereire, at n°35 and Edmond Rostand, from 1891 till 1897, at n°2. It is moreover here – tells the legend – that he wrote the book « Cyrano de Bergerac »

Today, prestigious offices replaced the formerly rich owners, but rue Fortuny remains a wonderful street not to be missed during your strolls in the 17th arrondissement!

To appreciate the interior of a Hôtel Particulier of the Plaine Monceau, go to Jean-Jacques Henner Museum.