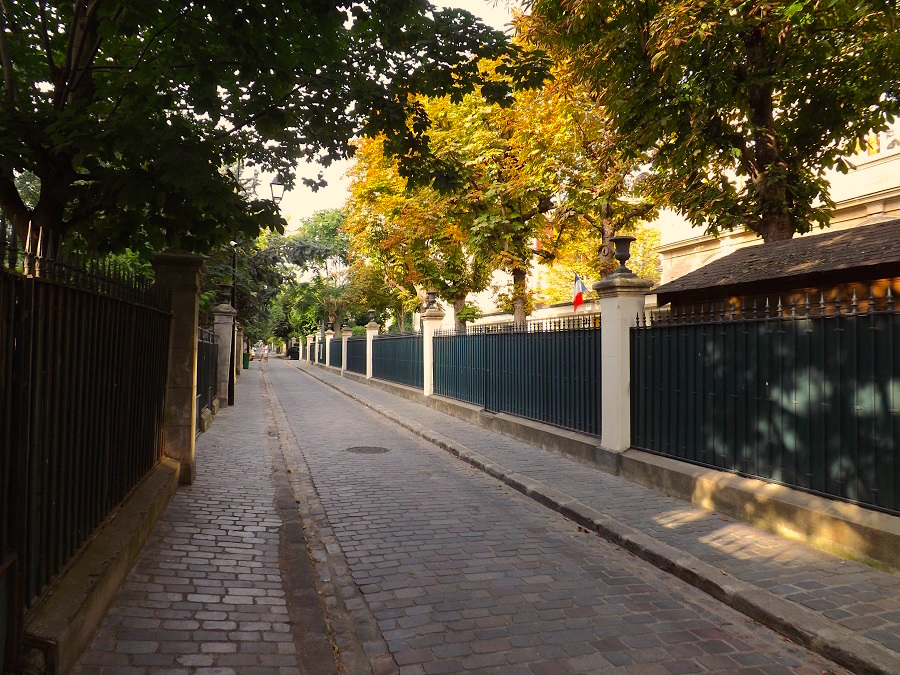 At the heart of the popular part of the 17th arrondissement ( district of Batignolles and Spruce ), and wedged between the teeming avenue de Clichy avenue de Saint -Ouen, lies an island of unexpected nature : City of Flowers .

230 meters long, where trafic is not allowed and isolated from the city’s agitation, the City of flowers is a part of these old Parisian streets that remain the same from those dats and are pleasant to stroll down in the quest of beautiful sceneries.

Note: The district takes its name from spruce a hamlet which depended before its annexation to Paris in 1860 in the town of Batignolles- Monceau and whose lands were planted with white spruce near the grape pinot current white.

Founded in 1847 by two owners who decided to divide their land in the same batch , the City of Flowers is more than a century and a half after its inception as an unexpected place , insulated and lined with greenery . It is also by its façade a single witness of Parisian architecture in the 19th century.

Right from the beginning of its establishment, the subdivision was indeed governed by a draconian agreement which set out the details. Floor , lighting, foundation heights and partition walls , many Building floors, ornamented fences … All these elements were strictly regulated. It was compulsory for example to plant 3 flowery trees in every garden and have a Medici vase on a stone pillar !

The statutes still in force today, which have undoubtedly helped to preserve the City of Flowers irreversible transformations.

Architecturally speaking, rises from the n°29, one of the most interesting buildings of this site still preserved. Behind the garden, one has a beautiful foundation in stone from the neo-renaissance style. A plaque located at n°25 also reminds that this is where the headquarters for the fake papers services was located, the NLM ( National Liberation Movement) of which all the members were shot by the gestapo in 1944.

The City of Flowers is a private road : open to the public from Monday to Saturday from 7 am to 19 pm access and Sundays and holidays from 7 am to 13 pm

Open from Monday to Saturday 7 am - 7 pm, sunday and public holiday 7 am - 1 pm
Continue reading