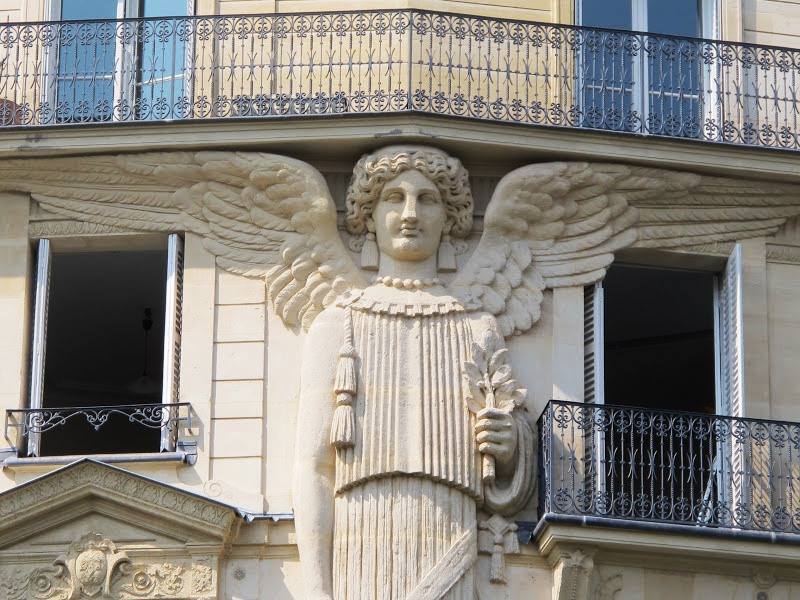 Few steps from the Museum of Arts and Crafts is hiding at n° 57 Rue de Turbigo (3rd district), one of the most amazing facade of Paris.

A treasure that is nevertheless very easy to admire. 3 floors high, this cariatide the mysterious origin is indeed impossible to miss!

Caryatids (female statue often wearing a long tunic, used in architecture as columns) abound in Paris. You can see more than 500 throughout the capital, most often used to adorn high porches. Caryatid of rue de Turbigo is, by far, the highest in Paris.

We owe this huge silhouette to Auguste Emile Delange, who proposed in 1851 in a Fine Art competition the draw of this cariatide. The topic had yet not much to do with it, since it was asked to design a lighthouse in honor of Augustin Fresnel, founder of modern optics… Seven years later, it’s not a lighthouse, but the beautiful caryatid that decorate the Haussmann style building.

A mysterious sculpture, nicknamed since then “the genius”, “the angel of the bizarre” or even “the woman with bag “. A nickname due to the small purse she holds in her right hand, typical accessory in the Second Empire.

The myrrh strand held in the left hand is an evocation of the Greek goddesses, in tribute to the most famous Caryatids, located at the Acropolis of Athens. 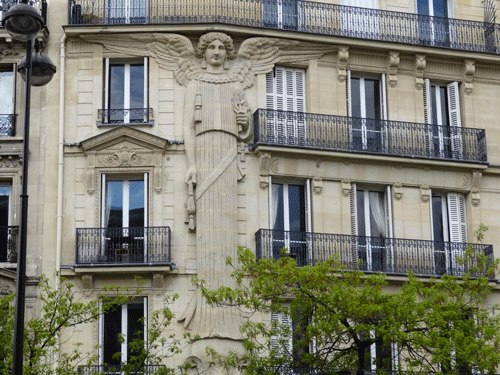 We do not know much either about its meaning. Some consider it the image of a reassuring philanthropist ready to help the needy, others as a “lace-making genius” in this neighborhood drilled in 1858 and largely intended for textile production.

Raymond Queneau, meanwhile, tells us that this cariatide is actually the tribute of a man who has earned a lot of money after following the advice of an angel seen in a dream.

Myth or reality, don’t miss it when you stroll in the neighborhood !