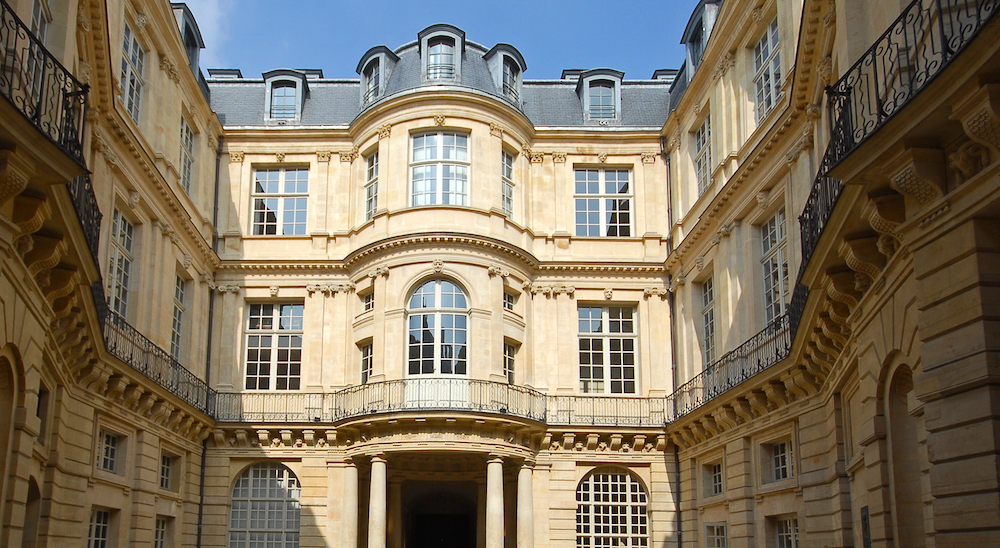 Located in the Marais, in the beautiful rue François Miron, l’Hôtel de Beauvais is a masterpiece of 17th century’s architecture. Classified Historical monument since 2004, it houses the Administrative Court of Appeal of Paris.

A public place which is theoretically not accessible, but you can admire the courtyard and its facades if you nicely ask the guards. Also note that the inside is generally open to the public during Heritage Days.

Mr. and Mrs. Beauvais received the property in 1654 by Nicolas Fiquet, who was the finance suprintendant (administration officer head of command in state spending). In 1656, the property was transformed into a great Hôtel Particulier and the works were handed over to Antoine Le Pautre, first king architect.

Mrs. Beauvais, her maiden name Catherine Bellier, indeed had favors from the Queen. First chambermaid for Anne of Austria, the Baroness of Beauvais were her most faithful confidant. It was also her, at the request of the Queen, who took the young King Louis XIV’s virginity, who was only 16 years old. Such a favour deserved to be rewarded !

On the 26 th of August 1660, Queen Anne of Austria, Mazarin, the Queen of England, the highest personalities of the court and… The Baroness of Beauvais attended from the balcony the procession of Louis XIV introducing his young wife Marie Therese of Spain to Parisians.

Later, between 1763 and 1764, Mozart lived with his parents in the hotel, at the time owned by the Ambassador of Bavaria.

AND AN ARCHITECTURE WONDER

After having admired the “Grand Style” facade from the street, enter the courtyard, a real architectural master piece. You will perceive ram heads on the facade, reminding the maiden name of the Baroness of Beauvais, Catherine Bellier (bélier means ram).

The shape of the hotel is original too. Constructed on an irregular land, the architect Le Pautre played with the asymmetry of the plot and built undulating facades. A puzzle which succeeded admirably! The hall with columns and bas-reliefs carved in stone is also part of the remarkable features of the building.