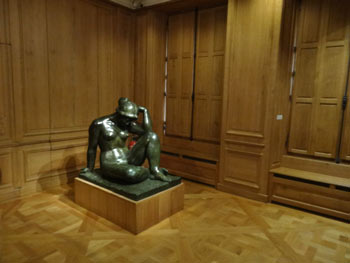 This museum, inaugurated in 1995, is housed in a nice town house of the rue de Grenelle, 7th arrondissement. It contains of course a large collection of the French artist Aristide Maillol, but also proposes 2 to 3 temporary expositions a year. Latter ones, which are very good, make this museum an inevitable place for art in Paris (currently: Canaletto in Venice).

Maillol, who was promoted to the rank of major sculptor of the 20th century after his death, was above all an all-round artist, a jack of all trades. And you will see it through the different halls of the permanent collection, in which you will discover that Maillol’s work isn’t just sculpture, and that his talent was far beyond just carved statues. He indeed first tried tapestry work in his home town Banyuls-sur-Mer (in the department of Pyrénées-Orientales), before he joined the art school in Paris when he was 20, where he entirely devoted himself to painting. Because even though he is known for the majestic naked women made of bronze and stone (that he started working at around 1895), the young Maillol intended to become a painter when he first got to Paris…

Even if he used multiple different supports to express his art, you will soon notice that the same motives recur in his works. Maillol obviously nursed a strong admiration for the women’s body, which indeed is ubiquitous. Maillol’s sculpture, classical and deeply influenced by antique civilisations, represents above all sensual bodies with rounded and smooth figures and elegant body language but usually grim-faced. It is a delicate style that you will also find in his paintings.

And if you wonder why there are not so many sculptures in the museum, it’s perfectly normal. Dina Vierny, who was Maillol’s muse and model, gave France the artist’s most monumental works in 1964, about twenty of which are today in the Tuileries gardens. And it is also Dina Vierny who, hoping to let a larger public know Maillol’s work started the idea of a museum dedicated to the artist, after she had already created a foundation in his name.