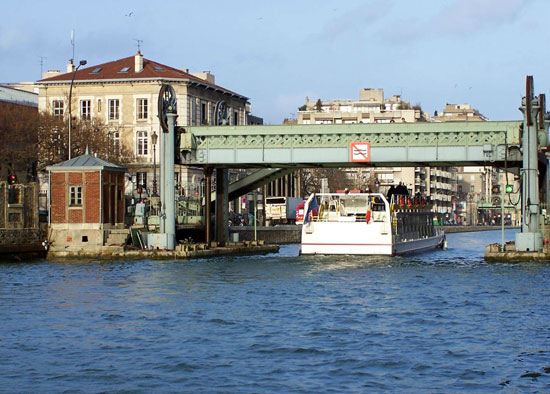 Ordered on August 2nd 1885, the Pont Levant de la rue de Crimée (19th arrondissement) is the last lift bridge in Paris. Extraordinary technological and architectural features for the time, that you can discover during a pleasant stroll along the Canal de l’Ourcq .

With approximately 9000 operations per year, you may also be lucky enough to enjoy the show of the bridge that rising to let a boat pass.

Registered as historical monuments since 1993, rue de Crimée’s lift bridge was renovated and somewhat modernized, in 2011. First hydraulic lift bridge in Paris, it worked with drinkable water and consumed 2m3 of water for each operation. A wastage modified in 2011 by providing the bridge a modern hydraulic power.

When the lift bridge is in operation, pedestrians can cross the Channel with a fixed bridge installed at its side. An ideal place to enjoy the show the show of the wheels,  the mechanism dating from its creation !

As for its history , this bridge is the fifth installed at thisplace, allowing passage between the right and left banks of the Canal de l’Ourcq . The first bridge was built at the creation of the Bassin de la Villette in 1808. Facing increasing maritime traffic, or just burned (previous bridges were made of wood ), it was decided to build a broader and functional metallurgical structure.

Not to be missed during your rides la Villette or the Canal Saint-Martin !