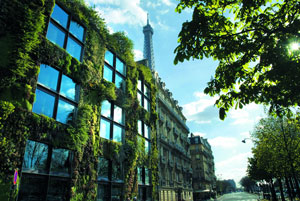 Think of Paris and no doubt, your mind fills with sun-dappled images of renaissance buildings and old-fashioned romance – but Paris doesn’t have to be all about the vintage glamour.

These days, the city boasts an incomparable sense of old meets new, with some of the most stylishly modern architecture around. So without further ado, here’s a look at some of the weirdest and most wonderful buildings in the City of Love.

Built in 1907, Les Docks de Paris was one of the first reinforced concrete building to be built in France’s capital. Long, rectangular and thin, the warehouse was originally used to store goods brought up the river Seine by barge boat.

However, in 2005, Paris based architects Jakob + MacFarlane won a competition to revitalise the building soon to be used as a budding cultural centre and the home of French fashion institute, Institut Français de la Mode. They chose to build a ‘plug over’, a green glass façade in the form of a wave, combined with steel, wood and a grassed roofscape. It’s truly something to behold.

Top tip: The 13th arrondissement is also home to Paris’ Chinatown, known as Triangle de Choisy or Petite Asie. Head there for an unbeatable array of delicious sights, sounds and smells that you won’t forget in a hurry.

When the Ministry of Culture and Communication decided to relocate their offices to two adjacent buildings in 2006, they faced one problem: one building was a 1919 classic Parisian beauty, whilst the other was a simple office block built in 1960.

To combat this, top architect Francis Soler ingeniously created a concept that would combine the old and the new in a way that would give equal importance to both. He achieved this by wrapping both buildings in one unifying façade, in the form of some artistically designed metal netting. Encasing both buildings, the façade in striking yet unobtrusive, cleverly uniting the two offices.

Top tip: Situated in the prime position of 1er, Paris’ 1st arrondissement, the area is also home to Musée du Louvre, Palais Royal, Tuileries Gardens, Pont des Art and that picture-postcard view of the Eiffel Tower you know from the pictures – so get your map out and start walking!

Nestled at the northeastern edge of the 19th arrondissement, Parc de la Villette has become a popular attraction for both tourists and Parisians alike. Designed by architect Bernard Tschumi and built between 1984 and 1987, the idea behind the park was to create a space for interaction and creativity, as opposed to the relaxation of a regular park.

>> More information about this Park

Top tip: Don’t be put off by the travelling distance to the 19th arrondissement, simply turn it into a day trip instead (see la Villette walking tour) The area is also home to the famous Père-Lachaise cemetery, the resting place of Jim Morrison and Oscar Wilde and is well worth a visit!

Perhaps one of the most famous parts of the 19th arrondissement’s Parc de la Villette and certainly one of the most memorable, La Géode appears at first glance to be a giant mirror ball. In fact, the ‘mirror-finished geodesic dome’ is simply the stylish home of the Omnimax IMAX cinema hidden inside.

Designed by architect Adrien Fainsilber and engineer Gérard Chamayou, La Géode was built in 1985, stands at 36 metres (118 feet) in diameter and boasts 6,433 equilateral triangles made from polished stainless steel. So whether you visit Parc de la Villette come rain or shine, La Géode is sure to reflect some spectacular views of the sky up above you.

Top tip: To check out what’s on inside the giant mirror ball and catch a film for yourself, head to lageode.fr.

Located in the 7th arrondissement, right alongside the Eiffel tower, the Musée de quai Branly is one of the most stylish museums in Paris. Home to the indigenous art and culture of the ancient civilisations of Africa, Asia, Oceania and the Americas, the museum building is undeniably modern.

Designed by architect Jean Nouvel, the building features glass walls on the inside, as well as a 200m wide ‘green wall’ made up of vertically planted greenery on the outside. The museum faces directly onto quai Branly, but the tall glass panelling between the two means that the front gardens are magically quiet, despite being so close to the busy street.

Top tip: This arrondissement is home not just of the Eiffel Tower, but also of the luxurious Paris lifestyle. You can also see closeby the wonderful Art Nouveau Building Style : l’immeuble Lavirotte. You will also find many beautiful hotels in the 7th arrondissement> – travel providers Expedia have a stylish selection.

the city boasts an incomparable sense of old meets new, with some of the most stylishly modern architecture around. Look at most wonderful buildings.
Continue reading