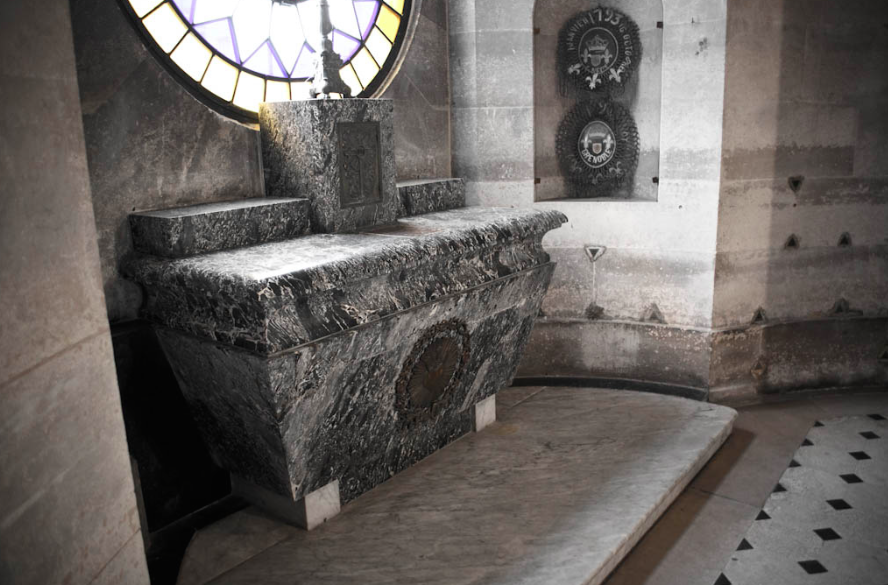 At the heart of the 8th district , halfway between the Gare Saint -Lazare and the Church of la Madeleine, is an unsung monument: la Chapelle Expiatoire (Expiatory Chapel) . A monument that is worth visiting both for its architecture, but also for its historical interest (although there is no yet explanations in English…).

Built on an old cemetery which received hundreds of corpses during the French Revolution , the chapel was indeed constructed at the exact point where King Louis XVI and Queen Marie Antoinette were buried after their execution in 1793.

In 1814, the monarchy is restored in France. King Louis XVIII takes the throne and wants to rekindle good memory of the royal family. He decided then to move the bodies to Saint-Denis Basilica , and to build in place of the former Revolutionary Cemetery of la Madeleine an Expiatory Chapel.

A monument destined to prayer and recollection. If the first one is not valid today, the second is still a lot ! This monument , which can be visited quickly (about 20 minutes ) , is indeed a real immersion in the darkest hours of the French Revolution, when terror and mass executions reigned.

THE CEMETERY OF LA MADELEINE

Receiving everyday day ten or so bodies, la Madeleine was really mass grave. In this cemetery will be buried hundreds of Swiss guards killed during the arrest of the king and his family at the Tuileries Palace (now the Jardin des Tuileries ). Tombstones you will see lined up on the sides of garden are symbolic tombs built in memory of those guards .

The guillotine, located Place de la Concorde (then called Place de la Revolution), worked then continuously from May 1793 to June 1794 . From the Royal Family to politicians through anybody being suspected of royalist belief, all suffered the same fate : the Madeleine cemetery’s graves . It will be closed in 1794, and the remains moved to the catacombs of Paris (underground ossuary) in 1859.

Neo-classical style , the chapel was built by François Léonard Fontaine, who took ​​many quotations from Roman antiquity, Middle Ages and Renaissance for the structure. Although being a place of worship, you will notice the unobtrusive Christian elements, reminding us the chapel also did duty as a memory place.

Inside, you will find the statues of Louis XVI and Marie Antoinette. Louis XVI pedestal is engraved with the King testament wrote before his execution, Marie Antoinette’s with the last letter written to the King’s sister , Madame Elisabeth.

Finally, the altar in the crypt marks the exact location where the king’s body was exhumed .   An unknown but great monument !