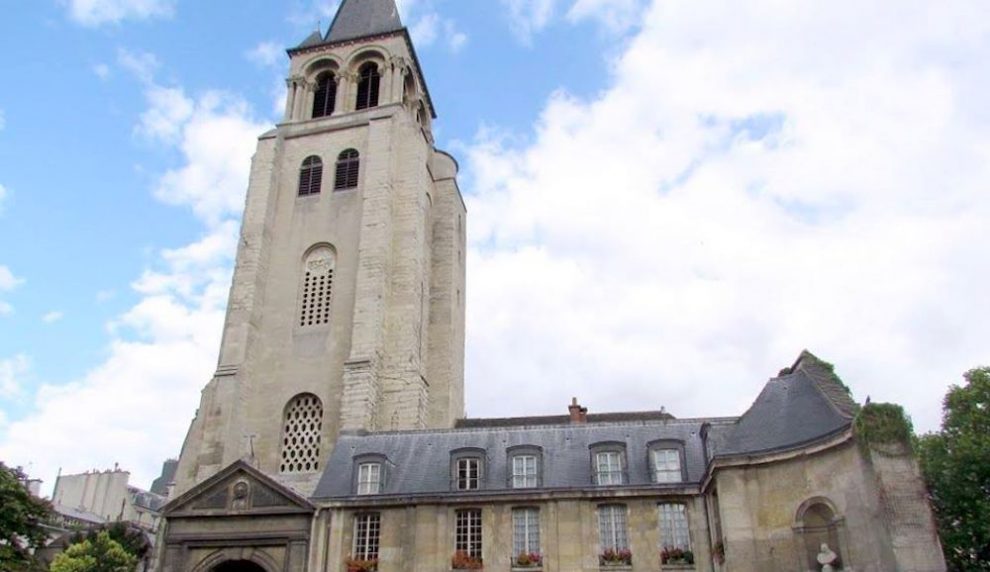 In the centre of the Saint-Germain-des-Prés neighbourhood, the abbey of the same name, founded in 543, is the oldest church in Paris. It is sort of a dean to the Parisian religious monuments which towers over this quite illustrious neighbourhood, which became famous in a time not so far away thanks to the writings of Jean-Paul Sartre and Simone de Beauvoir and also the trumpet of Boris Vian. Nowadays the jazz clubs aren’t the sweaty dens of iniquity they used to be, and you will meet much more tourists than intellectuals at the Deux Magots or the Flore. But the Abbey of Saint-Germain-des-Prés and its surroundings are still a must during a visit in Paris.

First of all because owing to its age, the church has experienced a very tumultuous history which could have eradicated it definitively from the Parisian heritage! In 886, for example, the Vikings – who had sailed back up the Seine to Paris – devastated and burned the building, which had to wait till the year 1000 to be renovated. After the French Revolution (in august 1794), tons of gunpowder stored in the church exploded, destroying a part of the church. Later again, the Baron Haussmann cut away parts of the church to build the Saint-Germain boulevard during the gigantic renovation works of Paris in the middle of the 19th century. Thanks to the excavation operated after these construction works, the biggest collection of Merovingian objects (5th – 8th century) was found, which is today exposed in the Carnavalet Museum (museum dedicated the history of Paris).

Despite all that, the Abbey of Saint-Germain-des-Prés is an architectural wonder in roman style – which is rare in Paris – and some structures are more than 1000 years old. If you go into the Saint Symphorian Chapel (on your right after the entrance), the visible stones from the bottom of the bell tower even date back to its Merovingian creation. As for the elements you will see inside, they are all in different styles and from different epochs, as needed for the reconstruction or transformation of the building. You will therefore notice that the nave is in roman style, while the choir and the ambulatory are in a primitive gothic style. And even though some sculptures date back to the 14th and 17th century, most works (frescoes, paintings, stained glasses, capitals) have been copied during the 19th century from the originals which are being conserved in the Museum of the Middle Age.

Since 2011, the Abbey of Saint-Germain-des-Prés is again being renovated.