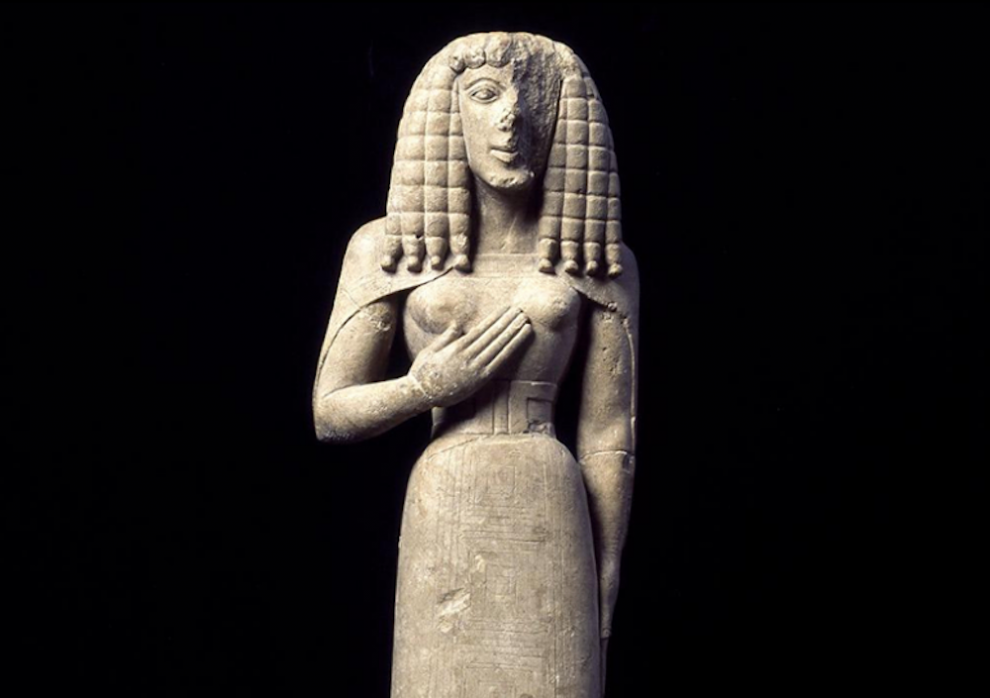 The Louvre is full of treasures. In addition to its world famous classics, hundreds of pieces deserve to be discovered for their history, witnesses of ancestral arts or forgotten civilizations. Among these, the Lady of Auxerre is one of the most extraordinary examples. A series of coincidences, oversights and coincidences which allow the museum today to present a unique work dating from the 7th century BC, and which constitutes one of the jewels of the department of Greek Antiquities.

The story of this Lady of Auxerre begins in the 19th century, in 1895 exactly, when the widow of a man named Bourgoin decides to part with the art objects that her husband collected in an auction room near Auxerre. Louis Bourgoin, who died a few months earlier, was himself a wood sculptor and great art lover, and would have run an antiques shop in Paris for a few years before establishing himself in Saint-Bris-le-Vineux, 10km of Auxerre. What is the history of this statue before this date and how did Mr. Bourgoin acquire it? We don’t know! An ignorance which leaves the door open even today to historians for a lot of new hypotheses … But we will stop here as far as we know.

Are sold by Mrs. Bourgoin 12 statuettes, 2 paintings, 1 painting, 12 medallion paintings, as well as a “Greek statue”. The latter, considered a grossly sculpted oddity, does not attract crowds. The exaggerated features of the silhouette and the oriental repertoire are not at all in the tastes of the time, and no specialist seems to have been curious enough to deepen the research on it. It is therefore the auctioneer of the auctioneer, Louis David, who is also a concierge at the municipal theater of Auxerre, who buys the work for 1 franc. He wishes to use it as a backdrop for the next comic opera that the theater offers, Galathée by Victor Massé.

When the performance is finished, the statue moves to the theater reserves, where it will remain for many months. It was even, it seems, used as a hat rack. Louis David will then drop it off in a suitcase, and anonymously, at the reception of the city museum. Probably more to get rid of it, therefore, than in a burst of artistic generosity!

But, once again, and when the work had finally landed in a museum, which one supposes to be the most apt to recognize a work of art, it was forgotten in the reserves. When it was (re) discovered ten years later, it did not even appear in the museum’s acquisition records.

This (re) discovery, we owe it to an archaeologist, curator at the Louvre museum, Maxime Collignon. While visiting the Auxerre museum, his eye stops at the sculpture. The director of the museum agrees to exchange a landscape of the painter Henri Joseph Harpignies (1819-1916), very famous at the time. The value of the Lady of Auxerre is today … priceless.

A style that was expressed through stone, clay, ivory or even jewelry, recognizable in particular thanks to the hairstyles, influenced by Egyptian statuary.

Finally, thanks to the analysis of traces of pigments in the stone (invisible to the naked eye), we know that this Lady of Auxerre was originally painted in bright and contrasting colors (deep blue, bright red, yellow Golden). A style that we would describe today as very “kitsch”, far from the idealized works in white marble that we traditionally associate with Greek art!

July 28 : Liberty Leading the People
The extraordinary journey of the Obelisk of the Concorde
The funny detail of the monument to La Fayette
The oddity of the Louvre that no one notices
Bateaux-Mouches: the best boat trips along the Seine
Discovering the royal emblems of the Cour Carrée du Louvre