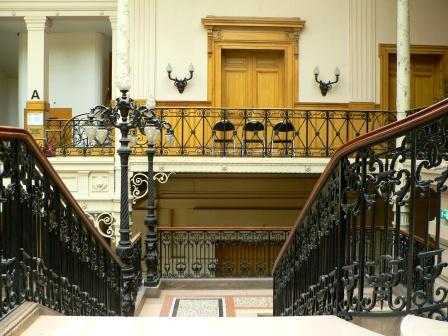 When we go off and explore Paris, the idea of visiting one of its City hall of district never came to our mind. Nevertheless!

The City hall of the 18th arrondissement, the construction of which began in 1888 by Marcellin Varcollier (who was a pupil of Baltard and official architect of the city) and finished in 1905 by Claude Auguste Salleron, is an exceptional demonstration of the metallic French architecture of the end of the XIXth century.

To admire the style, go to the big central hall. You will see then the subtle stony, glass and iron alliance which gives all its character to this 25 meter room onto 20, highlighted by the staircase in ironworks as well as the small columns subtly decorated which support the window.

Besides this singular architecture, two anecdotes make of this building an unusual parisian place:

– Go to the wedding room and look out the door. At both ends, two paintings by Maurice Utrillo, (a famous French painter born in the 18th arrondissement of Paris). It is said that the artist had donated these paintings in order to pay his taxes…

– All bottle of Clos Montmartre (the Montmartre vineyard that produce every year about 2000 bottles) is stored in this building, which has also a tasting room.

Are you seeing the City Halls of the same eye?