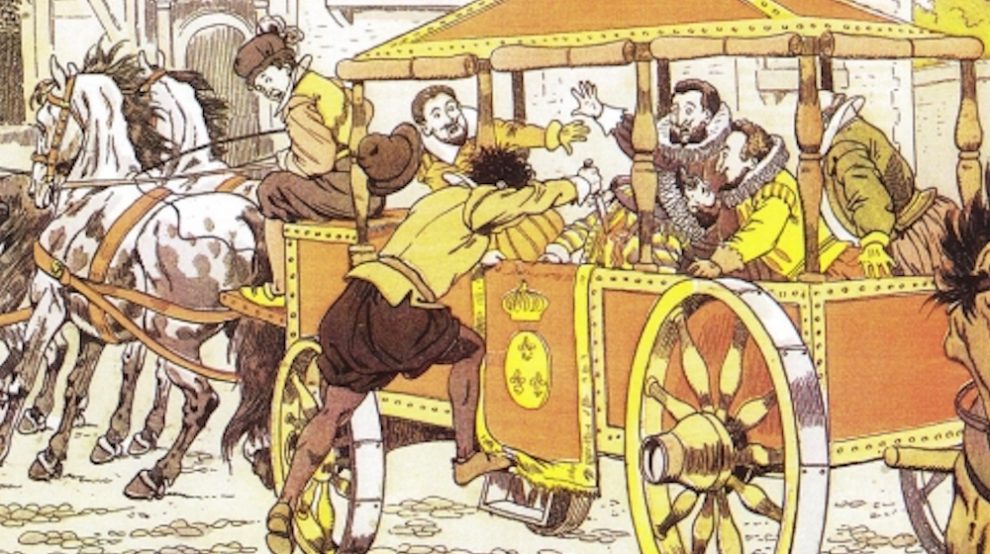 Rue de la Ferronnerie, in the 1st arrondissement, keeps on its pavement the memory of a major event in the history of France: the assassination of Henri IV on May 14, 1610. An inscription that the thousands of passers-by who tread the ground of this historic street every day, which nevertheless deserves a stop. Because behind this simple plate hides a long and fascinating story, where religion, love and power mingle. The perfect ingredients of a successful fiction, which far exceeds reality… 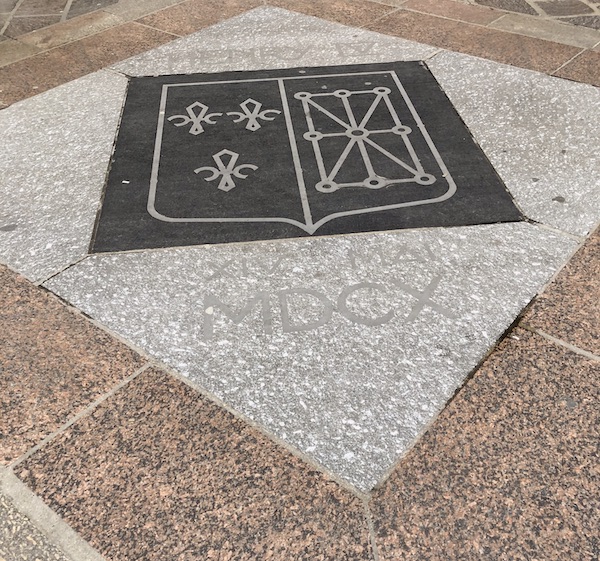 On May 14, 1610, Henri IV was at the Louvre. The court had celebrated the coronation of the queen, Marie de Médicis, in the Basilica of Saint-Denis the day before. A ceremony more symbolic than anything else, since the spouses had been married for 10 years already. But Henry IV was soon to go to war, and his wife’s enthronement was to give him legitimacy and power during his absence.

A war of succession…

The King had indeed engaged in a war of succession which affected German lands in a strategic area of ​​Europe, at the confluence of the Rhine, the Meuse and the Ruhr. And which consequently involved many neighboring countries, including the Spanish, Catholic Netherlands, led by the Habsburgs, the main enemy of France.

In 1609, the holder of the duchies of Cleves and Juliers (a few tens of kilometers from the current Belgian and Dutch borders), Duke Jean-Guillaume, died without a direct heir. Among the pretenders to the succession, Madrid supported the Catholic princes, Paris those Protestants. A pure political game for Henry IV who had allied himself with the Dutch United Provinces, Protestants, who had declared their independence from Spain in 1581. Those who had not forgotten the past of the king, former Protestant leader with multiple opportunist conversions (he converted six times), rather saw an additional deception intended to bring down Catholicism.

Although appeased, France remained prey to religious wars. After years of civil war, Henry IV had managed to make himself appreciated by a large part of the population, thanks in particular to a peaceful internal policy and prosperous finances. But all that was very fragile, and everything could quickly change…

Behind the war of succession was also hiding a love story. The confusion of genres was usual for the Vert-Galant, for whom love and politics have always been intertwined. Aged 55, he had fallen madly in love with a 15-year-old girl, Charlotte de Montmorency. Promised to a young and valiant soldier, Henri IV preferred to marry her to his nephew Henri II de Bourbon, who had the reputation of being attracted to men. A significant quality for the king.

But nothing went as planned! Exasperated by the royal omnipresence, the prince left with his wife outside Paris… And learned that the king was not far away. He then went to Picardy, where the king, probably by chance, followed him. He then decided to cross the border of the kingdom with his young wife and to go to Brussels. Double betrayal for the king, who sees the couple place themselves under the protection of Spain, while the crossing of borders by a blood prince was prohibited without royal authorization.

Despite a climate of peace, a peaceful atmosphere in the kingdom of France for several years and rather well-filled coffers, Henri IV decided to go to war. The heart has its reasons that reason ignores…

The assassination of Henry IV

After the coronation of the queen, therefore, her solemn entry into Paris is planned, via rue Saint-Denis. This May 14, Henri IV wishes to discuss the final preparations for war with his minister and faithful friend Sully, who is ill and living in his office at the Arsenal. The road not being long, he was only accompanied by a few courtiers and valets. The carriage leaves the Louvre at 4 p.m., and nobody notices that at the exit of the palace a strange character with a red beard looks at them strangely.

The king wants to take advantage of her outing to see the festivities in preparation put in place for the queen’s entry into the capital and opens the small leather curtains of her car (vehicles do not have windows at this time). They took the chemin de la Croix-du-Trahoir (today rue de l’Arbre-Sec), rue Saint-Honoré, and entered the narrow rue de la Ferronnerie where two carts, one laden with wine and the other of fodder, block the street. The carriage stops at the foot of an inn with the sign of the crowned heart pierced with an arrow… Premonitory sign.

The man with the red beard who was waiting in front of the Louvre had followed the carriage on foot. Taking advantage of this halt – and the open curtains – he jumped onto one of the spokes of the carriage wheel and delivered three stabs to the king. The killer is immediately arrested. His name is François Ravaillac. Convinced that the war was directed against the pope and the Catholics, and that the king of France had remained faithful to Protestantism, he will affirm during his trial to have acted alone, accomplishing a divine mission. He will be executed on May 27, 1610 in Place de Grève.

An event that took place at the exact place where the commemorative plaque of the rue de la Ferronnerie is located.

History of the assassination of Henri IV on May 14, 1610 in Paris, rue de la Ferronnerie. A commemorative plaque is visible on the ground at number 11 of the street.
Continue reading

Pont-Neuf, former quacks capital
5 photos for a travel back in time
July 28 : Liberty Leading the People
The crazy tale of the colonne Vendôme
Walking Tour French Revolution around Tuileries Gardens
The oldest public clock in Paris