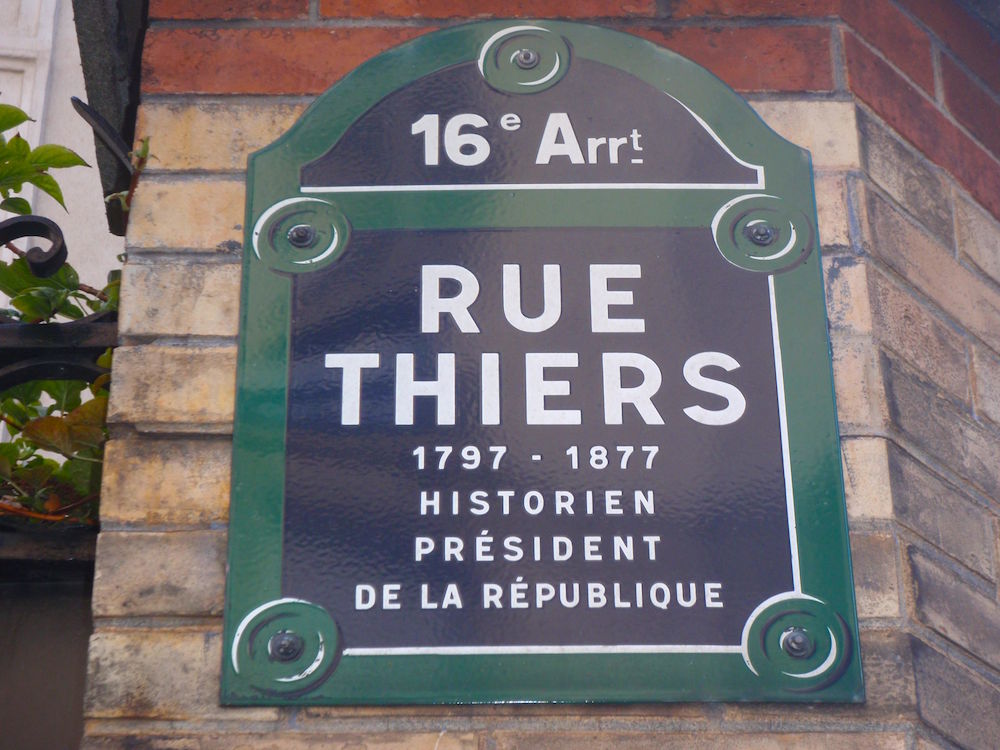 One day we were strolling in the 16th arrondissement of Paris, in the chic district around the Place Victor Hugo, appeared the rue Thiers. A small street lined with bourgeois buildings, opened in 1910 in honor of Adolphe Thiers, first President of the Third Republic. he was actually much more than that.

A question then comes: how is it that a Paris street, and hundreds of others in France, still bear the name of Adolphe Thiers?

Adolphe Thiers, the action at the cost of contemplation

Born in Marseille in 1797, Adolphe Thiers studied law in Aix-en-Provence. In 1821 he moved to Paris. Fascinated by history, he will published between 1823 and 1827 his first major work – in 10 tomes – the History of the French Revolution. He was the first to draw a complete history of events. But today, despite the extraordinary success of that time, his writings have fallen into oblivion. A success that however offered him a chair at the French Academy in 1833, and comfortable incomes… 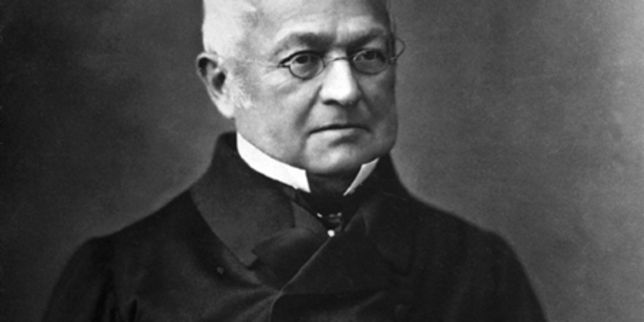 Finally mattered little to Adolphe Thiers posterity. The man worshiped to action, and despised contemplation. . According to him, “Man is born to act Whether or is not intended to happiness, it is certain at least that ever life is more bearable than when acting strongly to him; then he forgets he is driven, and continues to use his mind to doubt, blaspheme, spoiling and ill do. “* Act at all costs, without further imperative that the present moment, and avoiding as much as possible to use thought. A way of thinking which probably explains the decisions taken by Thiers in his political life.

Deputy of the Bouches-du-Rhône, Councillor of State, Secretary General of Ministry of Finance, Undersecretary of State, Minister of Finance … Adolphe Thiers will climb one to each echelons of power, becoming in 1832 Minister of the Interior. A position that will allow it to display its relative concept of freedom and democracy, who declared himself throughout his life the “party of the Revolution.”

In April 1834, 6,000 workers of the Lyon silk (silk weavers) revolted against falling wages and a law to ban associations. Thiers pretended at first not to intervene, leaving the barricades form in the city. The assault will be given between 9 and 15 April, and will be 600 deaths. A revolt that spread to Paris, where barricades will be deployed from 15 April. During the attack of one of the barricades by the army in ancient Transnonain Street (now rue Beaubourg) an infantry captain was killed by a shot fired from a building of the street. The next day, everyone in the building will be massacred.

A bloody repression that was a prelude to the biggest massacre sponsored by Thiers, during the Paris Commune. After two months of insurrection in the capital, Adolphe Thiers, then chief executive, is entrenched in Versailles. He negotiated with the Prussian occupying the release of 60,000 soldiers who serve him, with the rest of his troops to crush the revolt. From 21 to 28 May 1871, the fighting will be about 20,000 deaths among the Communists (about 1,000 for Versailles). A repression that will end during heavy fighting in the cemetery of Pere Lachaise, where 147 must be performed in Paris on the wall now become the “wall of Federated.”

Behind this cold and authoritarian nature also hid a surprising womanizer. If history has not retained his works in 10 volumes, she also forgot that man lived with three different women under the same roof, and all from the same family!

Around the age of 30, Adolphe Thiers became friends with Dosne family, especially with the hostess, Euridyce Dosne, who became his mistress. Regular attendance of the house that will make him meet the eldest daughter of the couple, Elise, whom he married in 1833, at the age of 15. Despite this, he continues to maintain his relationship with the mother.

Apparently not satisfied, it is also infatuated with the younger sister Elise, Felicie, who became his second mistress. Our dear President was therefore a married man who had as lovers under one roof, his stepmother and stepsister!

This last story, which reports to the story, is obviously not to be considered in the question here. The glory of a man can not be judged in terms of privacy, as unrestrained as it is.

But apprehending the man as a whole – became monarchist republican center-left, self-proclaimed party of the revolution that has continued throughout his political life to quell rebellions – how the story-t- it could transform one Balzac described as a “weathervane that despite his incessant mobility is on the same building” in great Republican figure?

Certainly, no one is looking, when walking in Paris, which were men and women whom the city pays tribute. And if it did, they would see, in the case of the rue Thiers: “1797 – 1877, Historian, President of the Republic.” Not a word about the thousands of deaths of which he is one of the first leaders. By removing the monarchy in favor of the Republic, France has made its first representative a secular saint. Regardless of his actions, he was elected, the citizens have chosen, after so many centuries where God has taken this decision instead of men.

Count the dead. The story she has retained the function.

The next time you will survey the street Thiers in Paris, Valence, Avignon and Grenoble (and many other towns), ask yourself this question: how is it that this man has the right to eternal gratitude, Republican, a street?