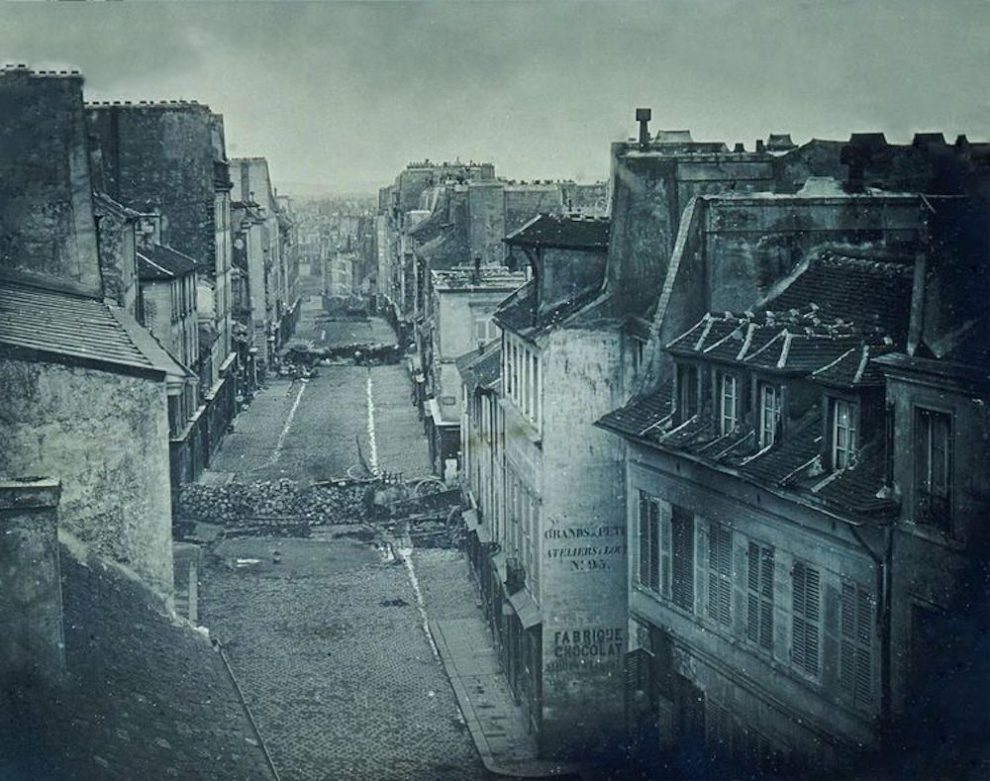 Paris holds a special place in the history of photography, and more generally in that of the visual arts. It was in fact in the capital that the first photo of a human being was taken (1838), and there again the first public screening of cinema took place (1895). Between these two founding dates, a young photographer also made history by taking the first photo of a barricade.

In February 1848, the third – and last – French revolution ended the monarchy. King Louis-Philippe abdicates, and the second Republic is proclaimed on February 24. But Paris remains a turbulent capital, deeply marked by the growing inequalities engendered by the industrial revolution. In June 1848, a new workers’ revolt broke out following the decision taken by the government to close the National Workshops, a state organization which was to provide work for the unemployed.

The Faubourg-du-Temple, where workers, peasants come to seek their fortune in new industries and foreign workers, is one of the bastions of this revolt. Dozens of barricades will be placed in the neighborhood, including the ones we can see in the photo, the first located at the crossing of rue Saint-Maur, the second near the crossing of rue Bichat. These “June Days” (June 22 to 26, 1848) were very severely repressed, the young Republic not hesitating to shoot its opponents. Among the thousands of dead (about 6,000), a hundred, or even more, were residents of the Faubourg-du-Temple.

It is a snapshot of these events that this snapshot offers us, of exceptional historical value, the full history of which we know today thanks to the remarkable work of the sociologist of history Olivier Ilh (La Barricade reversed, history of a photograph, Paris 1848, Editions du Croquant, 2016).

The first photo of an insurrectionary barricade

This photo was taken by a young photographer, by the name of Charles-François Thibault, at the level of n ° 92 of the current rue du Faubourg-du-Temple on the morning of Sunday June 25, 1848. The insurrection is coming to an end, and only the last defenses of the working-class districts of eastern Paris resist.

Thibault used twice, probably between 7 am and 8 am, his daguerreotype, a primitive process of photography which fixed the image on a metal plate. These two pictures are visible in Parisian museums, the first at the Carnavalet museum, the second (featured image) at the Musée d’Orsay. One distinguishes there in particular a flag planted in the axle of a wheel on the first barricade (which according to the researches of Olivier Ilh carried the inscription “Democratic and social Republic”) as well as silhouettes of back.

These are the first pictures showing an insurrection and complete barricades. This scene is also regarded as the first photographic illustration of a report in the newspapers, since it was published a few days later in the form of engraving (one could not reproduce at the time directly the daguerreotype in a printed document) in the newspaper L’Illustration, with the caption “The barricade on rue Saint-Maur Popincourt on Sunday morning, from a plate daguerreotyped by M.Thibault”.

On June 26, at daybreak, General Lamoricière’s troops gave the final assault. Thibault also immortalized this moment. The revolt was over.

Story of the first photo of a barricade, which we owe to the photographer Charles-François Thibault, taken in the morning of Sunday June 25, 1848 at the level of n° 92 of the rue du Faubourg-du-Temple today.
Continue reading