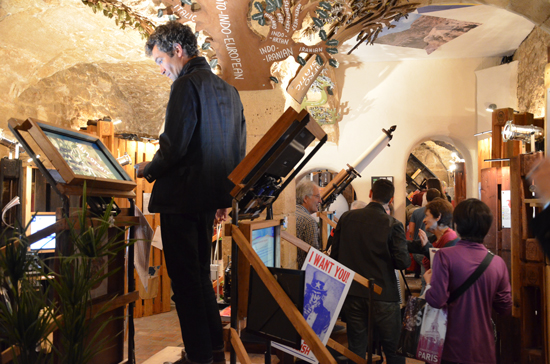 Opened in 2013 in the 6th arrondissement, between the Luxembourg Gardens and the Saint-Sulpice church, Mundolingua is a unique space dedicated to speeches ​​and languages​​.

A space where visitors can manipulate, experiment, play and learn the languages ​​and its​​worldwide history.

Built as a journey to discover the language in its broadest form, Mundolingua Museum is made of several rooms with themes as various as the production of sounds, the brain mechanisms, alphabet and even invented languages as Esperanto.

Does our writing reveals personality? What is the difference between a language and a dialect? Is Braille a language or writing? The brain of a bilingual is it similar to that of a monolingual? What is language?

As many questions that are answered, in which visitors are invited to think about the place of languages ​​in our society.

Spaces both educational and playful, backed by many interactive media and a rich documentation. And the opportunity to enjoy the architecture of a beautiful neoclassical building, in addition to stroll the typicals cellars of Saint-Germain-des-Près.

An original journey into the world of language that speak both to passionate and curious people, also ideal for children.