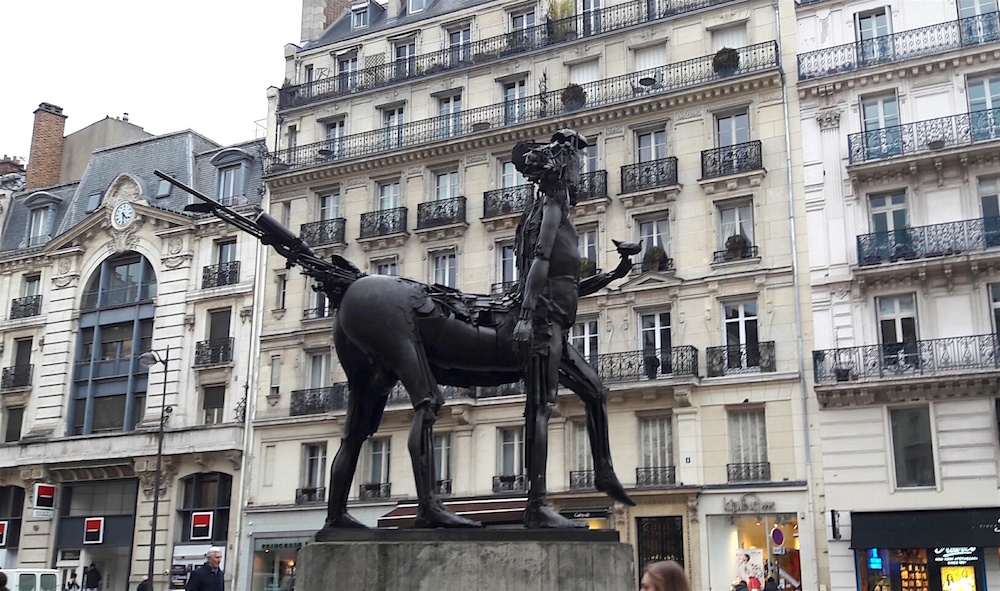 If the golden age of public artworks in Paris dates back to the 19th century, this tradition reappeared in the second half of the 20th century.  Modern or contemporary public art to discover during your walks in Paris. 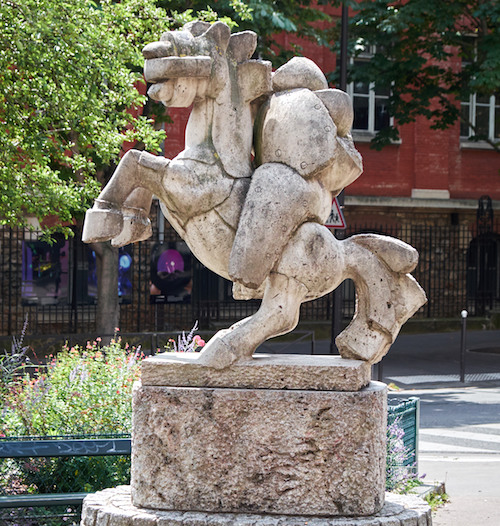 Originally from Santiago de Compostela, Spain, Camilo Otero lived a large part of his life in Paris. In the 1960s, he moved to a studio near the Place Lucien Herr. Winner of the prestigious Prix Bourdelle in 1975, his “Cheval Cabré” sits in the middle of this elegant little square since 1980. 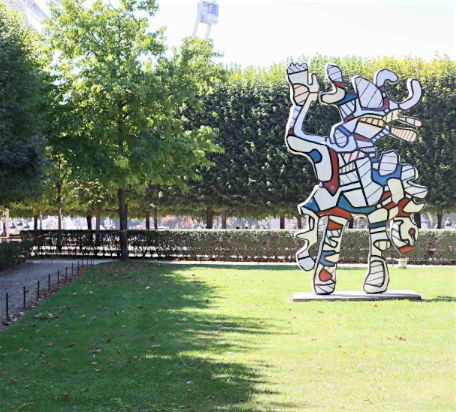 Former royal domain, the garden of the Tuileries has throughout its history always been a land of art. A tradition that lasts, since in 2000 has been installed the Bel Costume of the French artist Jean Dubuffet. First designed to be part of a monumental ensemble intended for the entrance of a wing of the National Gallery of Art of Washington, this monumental  4 meters high silhouette was executed in 1998 from a model realized by the artist in 1973. 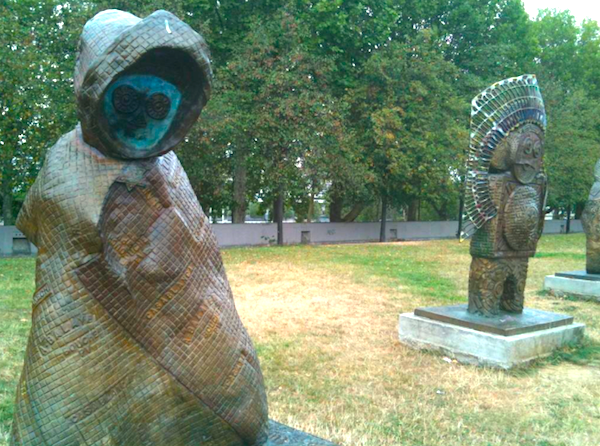 In the Parc de Bercy, at the level of the Simone-de-Beauvoir bridge, there are 21 monumental bronzes representing the children of 21 countries. Each statue was made from urban elements prints (cobblestones, sewer plates, grids…). 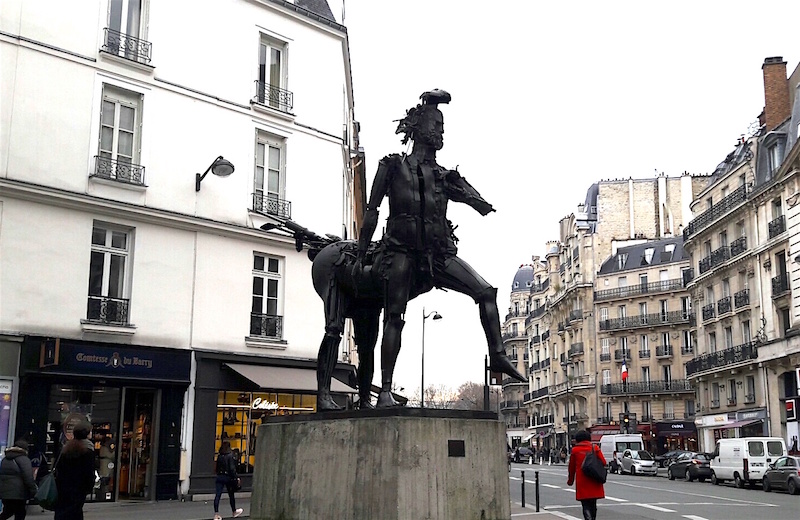 In Saint-Germain des Pres, you can see an imposing sculpture by César Baldaccini, known in France as the creator of the trophy of the French cinema ceremony. The original model of this Centaur has been invented by the artist in 1976 in tribute to Pablo Picasso. In 1983, the Minister of Culture Jack Lang commissioned 100 works by 100 artists, including César, who decided to realize his monumental Centaur. His face has the features of Caesar, while the mask of Picasso is placed in a visor on his forehead. 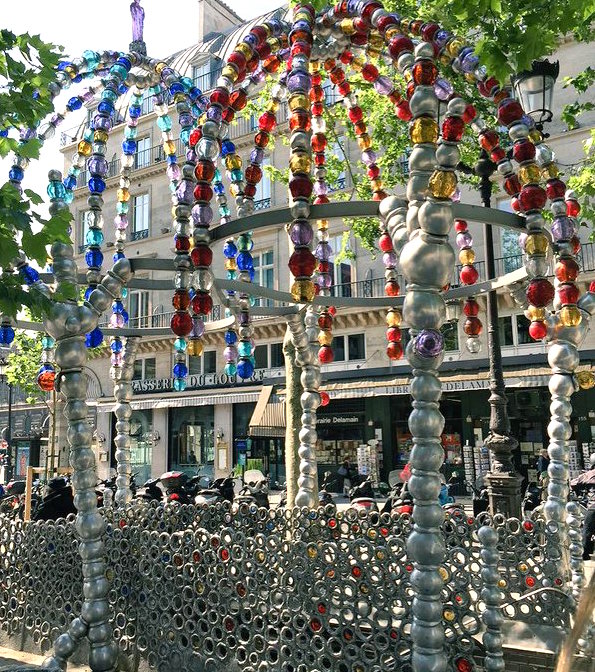 Facing the Palais Royal and the legendary Comédie Française stands a stunning metro entrance. The work of the French artist Jean-Michel Othoniel is made of garlands of Murano glass beads, which are supported by aluminum pillars. A metro entrance that at the time of its inauguration created many controversies…. As when Hector Guimard presented his Art Nouveau edibles in 1900 !

Inside the Royal Palace, you can contemplate another work of contemporary art that is controversial: the Buren columns. 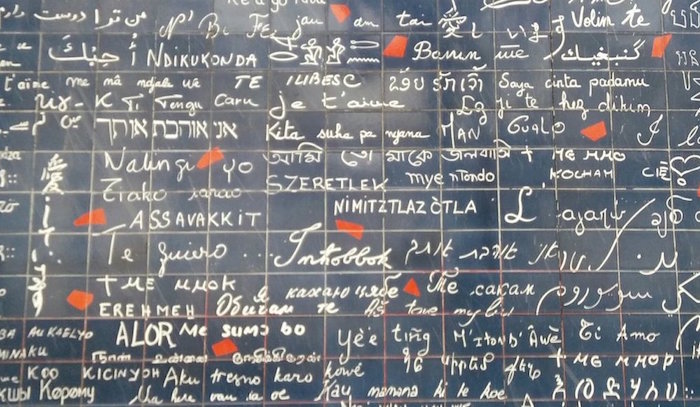 In Montmartre, in a small square that borders the Place des Abbesses, is the “I love you Wall” since 2000. A monument to the glory of lovers which declines 311 “I love you” in 280 different languages.

More information about I Love you : The Wall.

Modern and contemporary public artworks to discover during your walks in Paris.
Continue reading