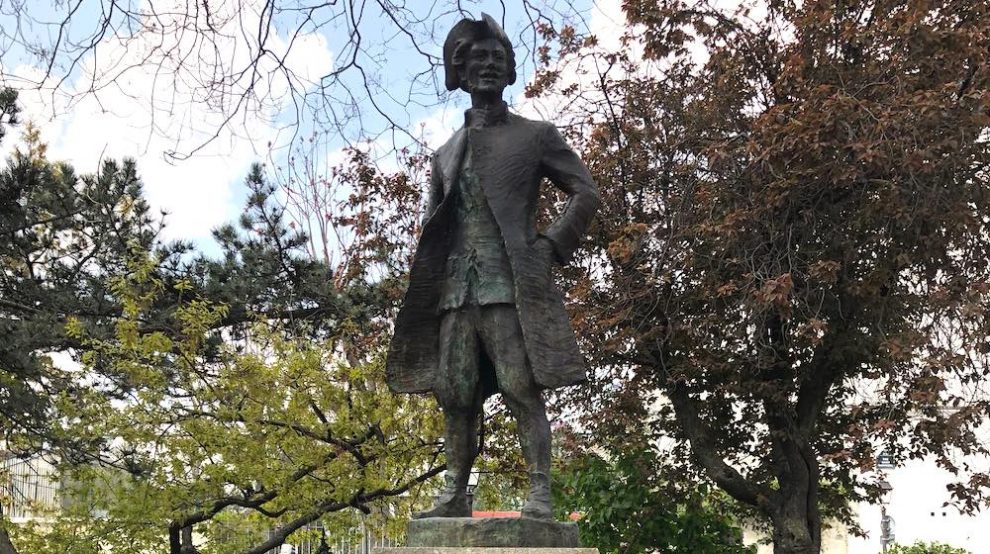 Known to bear the name of a pretty rue Montmartroise, the Chevalier de la Barre, whose statue stands in a small park not far from the Sacré-Coeur, hides a history somewhat forgotten today. Symbol of an 18th century rich in new ideas and dreams of emancipation, he paid a heavy price by undergoing an execution as violent as it was disproportionate. The last executed for blasphemy in the history of France, he contributed to the rejection of the Church by the population, a movement which ended with the Revolution. What a story that of the Chevalier de la Barre!

Born in Seine-et-Marne, François-Jean Lefebvre de La Barre came from a noble family in decline. Left without an inheritance on the death of his father, who had squandered the family fortune, he joined with his brother one of his aunts, Abbess in Abbeville, in Picardy. A rather classic adolescence takes place at the time for a son of a good family, although the young man turns out to be rather turbulent and irreverent.

In August 1765, a crucifix on the Abbeville bridge was desecrated. What should have been a rather banal news item will become a real affair of state.

The local religious community is looking for the culprits, inviting the population to denounce them during masses on pain of divine vengeance. The petty bourgeoisie of Abbeville, frightened by the apocalyptic sermons, begins to point the finger at a group of young people, far too idle for their taste, as responsible. Some of the young Knight’s friends manage to flee. He, and one of his companions, Moisnel, aged 15, will be arrested.

The execution of the Chevalier de la Barre

First accused of having desecrated the crucifix, they are also accused of having sung impious songs and of not having taken off their hats when a procession passes. The Barre apartment was searched, and the judges found a copy of the Dictionnaire philosophique portable, a pocket manifesto published anonymously by Voltaire.

Published in 1764, this easily transportable dictionary listed diverse and varied subjects, from Nature to Destiny, with a tone of great freedom. Religion, and more particularly Christianity, obviously had a place of choice, tackled in subjects such as Tyranny, Torture, Freedom of thought or Tolerance. Condemned by the authorities, the book was nevertheless very successful, both thanks to the novelty of its ideas and its small format. With the Chevalier de la Barre, it was Voltaire’s work that the Church wanted to suppress. 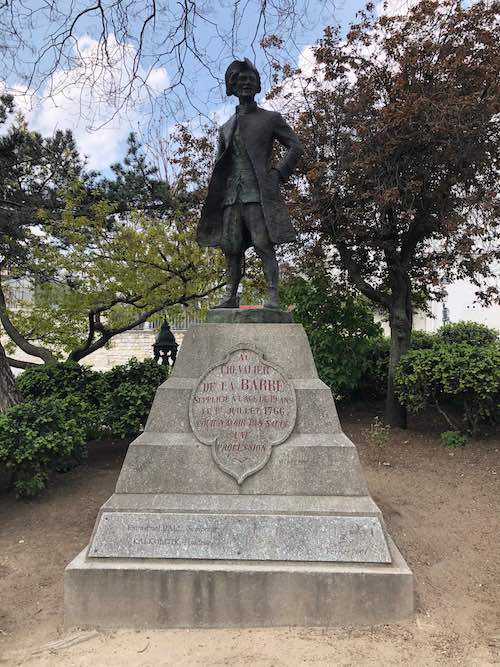 Tried for the first time in Abbeville, he was condemned for “impiety, blasphemies, execrable and abominable sacrileges”. The judges order that his hand be cut off for not having greeted the procession, that his tongue be cut off for having sung the ungodly songs, that he be beheaded and burnt. Luckier, his friend Moisnel benefited from the leniency of the judges because of his age.

The Chevalier de la Barre appealed, and a new trial was held in the Parliament of Paris. Fifteen judges out of twenty-five are in favor of the first judgment, and Louis XV refused to use his right of pardon.

The final sentence is as follows: Through the town of Abbeville, the Chevalier de la Barre will have to make “amends” in front of the church, that is to say admit his faults in public, on his knees, bare head and bare feet, having the rope on the neck, signs in front and behind bearing these words: “impious, blasphemer and execrable and abominable sacrilege”, then ask forgiveness from all. He will then have his tongue cut out, before being transported to the public square of the city (different from that of the church, therefore), to be subjected to the ordinary question (which means to be tortured) and the extraordinary question ( which means being tortured even more violently …). After which he will have his head severed, body and head thrown into flames and ashes scattered in the wind. The judgment of the Court of Parliament specified that Voltaire’s portable philosophical dictionary was to be thrown into the flames with the body of the condemned …

Voltaire will make this affair public, which will mark public opinion. “Some judges have said that, in the present circumstances, religion needed this fatal example. They were quite mistaken; nothing harmed it more. One does not thus subjugate the spirits; one indigns them and one does them. revolt.” Wrote the philosopher … The Revolution will prove him right! 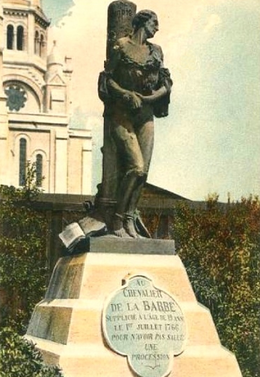 Rehabilitated during the French Revolution, the Chevalier de la Barre will become a symbol of religious fanaticism. In 1905, a statue was erected in Paris, in front of the Sacré-Coeur in Montmartre, as an emblem of resistance and secularism in front of this monument of contested history.

Founded by the Germans, the current statue dates from 2001 (only the pedestal is original), and has been relegated far from the Basilica, in a small square out of sight of visitors…

Died at 20, after the French Revolution, he became a symbol of religious fanaticism. A statue in Montmartre pays homage to him.
Continue reading

The Coronation of Napoleon's secrets (Louvre Museum)
The macabre past of the Buttes-Chaumont
Hubertine Auclert, the forgotten "suffragette"
When the first impressionists, exhibited in Paris, were treated as insane
The last staircase Louis XVI climbed in freedom
The first photo of a barricade