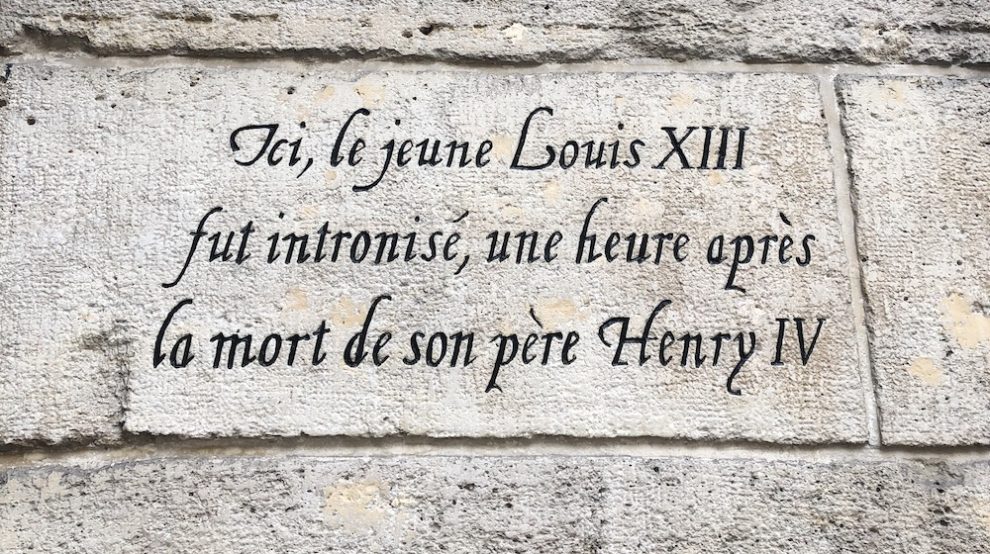 At number 8 rue des Grands Augustins, at the corner of rue du Pont de Lodi (6th arrondissement), an curious inscription engraved in the wall says: “Here, the young Louis XIII was enthroned, one hour after the death of his father Henry IV”.

Surprising, since the enthronement is, as its name suggests, the moment when the king is installed on a throne after his coronation, traditionally in Reims. It can also be understood figuratively, but would be as much surprising as if a 9-year-old future king had been enthroned in a Parisian convent just an hour after his father was assassinated. So I investigated !

The convent of the Grands Augustins

It was in the 13th century that an order of preaching and beggar monks, the Hermits of Saint Augustine, settled here. The order was subsequently divided into two groups, Greater and Lesser. The Petits-Pères settled on the right bank, with the Notre-Dame-des-Victoires church as a chapel (hence the rue des Petits-Pères…), the Elders stayed in the convent of origin. One of its rooms, which was one of the most important in Paris, was used in particular for the assemblies of the Knights of the Order of the Holy Spirit, and sometimes for those of the Parliament. Two details that may seem perfectly innocuous. They are, however, of crucial importance in our investigation.

Knights of the Order of the Holy Spirit

Founded in 1578 by Henry III during the wars of religion to rally the nobility around the throne, the Order of the Holy Spirit was one of the most illustrious orders of chivalry in the French monarchy. A closed association which could only welcome 100 members, was made up of the highest nobility in the country. A closed group of knights, archbishops and great officers of the kingdom which had no other function than the symbolic one. But which turned out to be a formidable political tool for promotions and rewards for the Bourbon dynasty. 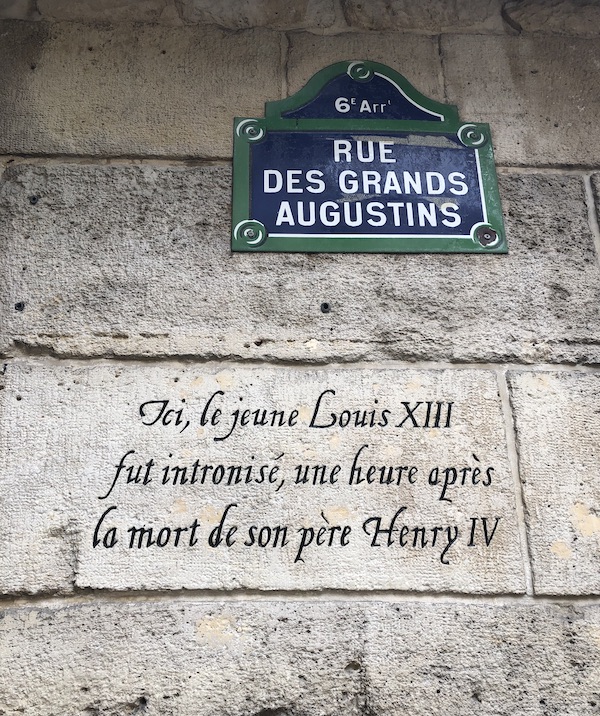 The order had little existence apart from the ceremonies, which took place once a year in the convent of the Grands Augustins. On May 14, 1610, Louis XIII was working in the building, unaware that at the same time his father was being murdered on the other side of the Seine. Hearing the news, it can be assumed that the greatest French nobility, all members of the order, get together in the hall, which, we recall, could also be used by Parliament. A very practical double function in such circumstances ! While the enthronement certainly did not take place there, it was there that the future king was recognized by his peers as a legitimate successor.

Louis XIII was consecrated in Reims on October 17, 1610, and the convent was destroyed during the French Revolution.

The information from rue des Grands-Augustins is therefore not false, but simply needs to be qualified… And reminds us that history can sometimes be a wonderful treasure hunt.

At 7, rue des Grands Augustins was Picasso’s studio, where he notably painted the famous Guernica.

The Naumachia of Parc Monceau
Allegorie of the four elements in the courtyard of the Hôtel de Sully
At the Glory of the Seine: the monumental Art Deco sculpture facing the Pont-Neuf
Hearts of the royal family used in the painting of a painting in the Louvre
5 photos for a travel back in time
The extraordinary journey of the Lady of Auxerre