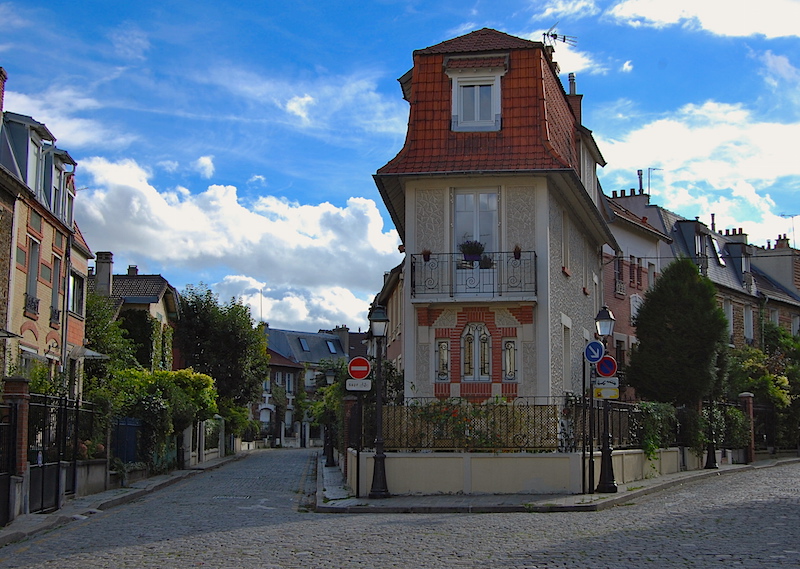 « La campagne à Paris » (Countryside in Paris”), is the real name of this haven of peace perched on a small mound of the 20th district, at the level of Porte de Bagnolet.

Let’s be honest, this neighbourhood is not known to be the most beautiful of Paris, neither to house wonderful sightseeing. Nevertheless, “la Campagne à Paris” all alone worth going so much the place is, in addition to be unusual, absolutely sumptuous.

Everything contributes to give la Campagne à Paris an unique atmosphere you won’t find anywhere else in the city. First its perpetual silence, a rare luxury in Paris, adding to the beauty of the place a delightful solemnity. Then the charming houses (about 90), that have at the same time a building unity and an only character. Indeed, you will see some endowed with marquee, other where wisteria juts out from small gardens, or some more that have chosen to differ thanks to coloured fronts.

At least, it is the feeling to be isolated from the rest of the city that really makes la Campagne à Paris an out of the ordinary place. If other “villages” of Paris offers countryside atmosphere (as the Butte Bergeyre or the Butte aux Cailles for example), only la Campagne à Paris manages to make you forget you are in Paris…

Note that the building of the houses have been finished in 1926 to accommodate working class. If you want to discover deeply the neighbourhood, you can go to place Edith Piaf (she was born in Ménilmontant) or go the « village de Charonne » too see the amazing rue Saint-Blaise.