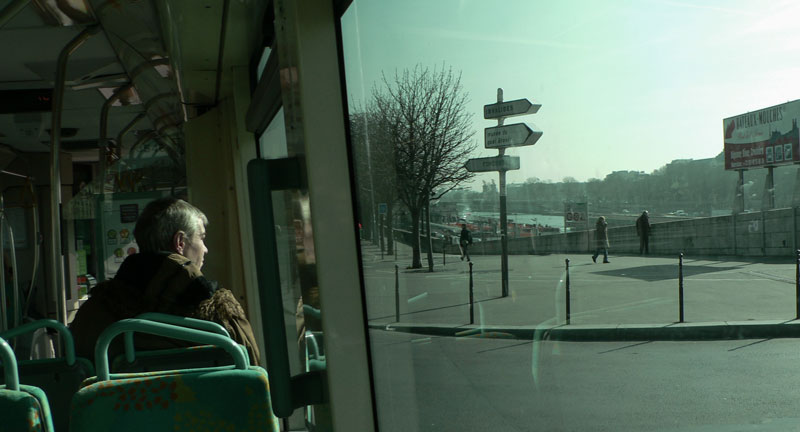 We suggest you below a Bus Tour alternative, expensive and restrictive. Our solution? To pace up and down Paris via its bus network. Obviously, you won’t find any tourist guide to explain you what you see (unless you come across a very likeable Parisian…), but if you take it during off-peak hours, you’ll be delighted to discover Paris in complete freedom, and only for few euros… It is furthermore the opportunity to live like a Parisian…

! Note that you can freely hop-on and hop-off during the route since a bus ticket is valid during 1:30 (only bus network, not metro). So you can, if you wish, hop-off, visit the neighborhood and hop-on again, as you do not exceed the fateful hour.

Bus 72 – Route along the Seine

It is a real journey through the history of Paris. The bus goes along the Seine and its numerous bridges. You will also discover a lot of monuments during this about 30 minutes route (depending on traffic).

Inside, take a sit, if possible, at the right side of the bus (facing the engine). After few minutes, you will see a beautiful panoramic view of the Eiffel Tower. Then, you will see the Invalides, the Grand palais, and the bus will go through the wonderful place de la Concorde. After that, rejoining the center of Paris, you will see the Musée d’Orsay, former train station converted in Museum, while the bus keep going alongside the Louvre. It is almost the end, enjoy it!

Of course, the bus can sometimes go too fast and you can miss monuments. It’s all right. The most important is too enjoy the trip living the Parisian lifestyle and discovering the beauty of Paris’ architecture.

This bus is an immersion into Paris diversity. Monuments, shopping streets, grands boulevards and “villages”, this about 45 minutes route is delightful.

Take the bus at Place Clichy, popular place at the crossroads of several districts.

You will go first through the Boulevard de Clichy to get to Place Blanche, where the throughout the world known Moulin Rouge is. You will then get to rue Chaussée d’Antin, huge shop street leading to the Galeries Lafayette. After that, the bus passes in front of the Opera (beg for the traffic light to turn red…) and, after driving down Boulevard de l’Opera, crosses the Louvre’s esplanade.

After the bridge, you go along the Musée d’Orsay then enter Saint-Germain-des-près neigbourhood. At last, the bus drives down avenue Raspail, from which you can see the Tour Montparnasse (on the right side facing the engine). On this avenue is also the Lutetia, one of the most luxurious Parisian’s Palaces.

“Vavin” stop, hop-off and visit Montparnasse district. You can also continue to Denfert-Rochereau. The drive is still interesting.

Really take this bus during slack periods. Certain streets as boulevard de Clichy or rue Chaussée d’Antin are known to be a drudgery.

Paris and its Arrondissements
What not to do in Paris
Old Meets New: The Coolest Architecture in Paris
Art deco museum
Greatest secret streets of Paris
Promenade Pereire
Visit Saint-Serge de Radonège Church