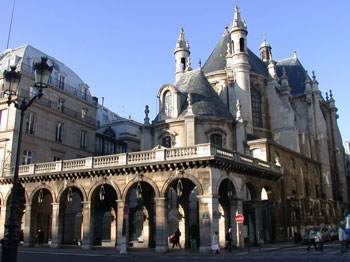 A few steps from the Louvre, the Oratoire du Louvre is a Protestant church since 1811. It was before that the royal chapel of the kings of France . A church full of history and symbols you can discover during every Sunday morning worship at 10:30.

Although originally Catholic, the Church church history is closely related to Protestantism. More than 10 years after the Edict of Nantes in 1598 , which recognized a freedom of worship to Protestants, a new Catholic congregation will know a huge success (congregation of the Oratory) , and will built a church at the location of the old walls of Philippe Auguste.

This is so to counter the influence of protestantism that the present church had been erected.

In 1616 , Father Pierre Bérulle bought a townhouse at the level of the current rue de l’Oratoire and built a chapel. The congregation attracting more and more faithful, the chapel became too small and the extension of the church was entrusted to Jacques Lemercier, architect of the king and creator, among other places, of the wonderful Palais- Royal.

Louis XII made the Oratory Royal Chapel in 1623. Although the work will stop between 1625 and 1740, the church will celebrate prestigious funeral services, such as Richelieu, Louis XIII or queens Maria Theresa and Anne of Austria.

It was Napoleon who gave the church to the Protestants in 1811.

Worship is celebrated since 1811 every Sunday morning. Many constructions have been made from this date according to the Protestant worship .

Among the most important changes are the Higher Rooms, the tribunes and the entrance tambour built between 1820 and 1828, the Gallery-terrace built by the architect Baltard (who was Protestant ) during the construction of the rue de Rivoli in 1854 , and the monument in memory of Admiral Coligny inaugurated in 1889.

Cult every sunday 10.30am
Continue reading

Church of Saint-Germain-l'Auxerrois and the 1st arrondissement Town Hall, twins that are six centuries apart<--:-->
The Cour du Commerce-Saint-André and the guillotine
Classical music in Paris churches
Expiatory Chapel
Royal Squares in Paris
The Holy Chapel