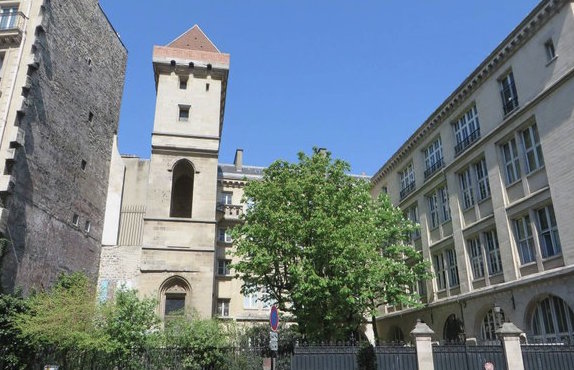 La Tour Jean Sans Peur (John the Fearless Tower), in the district of Les Halles, is a monument that goes unnoticed when you pass by. Perhaps because, despite its unusual architecture, it is an ordinary remnant of a vast princely residence of the 15th century today stuck in the courtyard of a school in the rue Etienne Marcel (2nd arrondissement)… However, it is an exceptional monument worth visiting!

If the tower was built in 1408 by Duke John the Fearless (whose real name is John I of Bourgogne), the private mansion around (not existing anymore) was built for the nephew of King St. Louis in 1270 before becoming property of Dukes of Bourgogne in 1318. As for the name “John the Fearless”, it was given to the Duke after he ordered to assassinate in 1407 Louis d’Orléans, his cousin and… brother of King Charles VI! Paranoiac, the Duke built then in the center of its residence a high tower to protect himself from reprisals.

The Tour Jean Sans Peur is now the tallest medieval tower visible in Paris, also typical in its architecture of the princely houses of that time. Open to public since 1999, you can visit it 2 or 3 days per week (depending on the season – see useful information).

The interior of the monument concentrates exceptional architectural elements as a fabulous spiral staircase topped by an amazing decorated vault. You will also visit at the top of the tower two rooms with outstanding conveniences (latrines, fireplace, ventilation …) for the period. If you notice the two rooms are the exact replica of each other, it is normal. Smart, the Duke wanted to mislead his attackers housing his servants in a room identical to his… What did not prevent him from being killed in September 1419 in Montereau (Seine-et-Marne). But far from his tower!

Finally, note that the Tour Jean Sans Peur was built on the remains of Philippe-Auguste’ wall, fortification that surrounded Paris from the early 12th century.